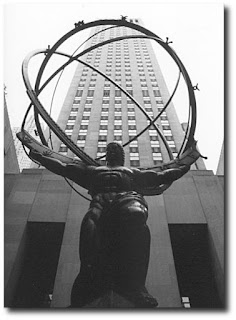 If we're going to complain about Obama complaining about blogs, let's be a bit more self-critical, and start with blog posts like this:

What I think is more insidious, though, than wingnut dentists’ cutting back their hours or Mrs. Instapundit cutting back on whatever it is that she normally does, is the widespread belief among elites that they and their colleagues are indispensable men. Like one of JMM’s readers, I fear that Geithner thinks that our economy would be decimated if we forcibly Galted the geniuses who ran our financial industry into the ground. I fear that when Andrew Sullivan and Joe Klein gush about the greatness of David Brooks, it’s because they view themselves and each other as a d’Anconia-Danneskjöld-Galt punditocratic triumvirate that may yet save the world from unseriousness and blogofascism. I even fear that when Villagers praise Obama’s “political gifts”, they’re doing so for the same reason they praised George Bush’s cowboy gut instincts; that is, because they feel that the talents of leaders in Washington reflect upon its scribes.

To put it simply, I fear that we are now ruled by incompetent egomaniacs who will never blow the whistle on each other, no matter how bad things get, because to do so would be to admit that none of them is indispensable or brilliant after all.

First, let me nitpick: we aren't being "ruled" by anyone, except those we put into positions of power. Bush saw that position as one of power wielded for the benefit of the elite, who would then benefit the people in some measure of trickle-down. Obama sees it as a position for the people. But he's no Andrew Jackson populist; he's smarter and better than that. So let's start by shedding all the blogging habits we acquired in the Bush years, and learn to look anew at what our political process has wrought.

The earlier part of the post, before it all goes so awry, makes the salient point about "going Galt:" it's childish, stupid, and absolutely no one, especially the people who make the most money and think they sit atop the society, are indispensable:

Quitting work because of a slight tax increase isn’t akin to anything from any sort of philosophy, not even one as crude and simplistic as Ayn Rand’s; it’s more akin to a child’s decision to take his ball and go home. It’s probably worse, though, since when a typical ten year-old gets home, stops crying, and wipes his nose, he doesn’t then fantasize about how the world will now suffer from the loss of his inestimable brilliance. I don’t know if Vincent Gallo is a Randian or not (it certainly wouldn’t surprise me if he was), but this quote summarizes Galtism in its current form perfectly: “I stopped painting in 1990 at the peak of my success just to deny people my beautiful paintings; and I did it out of spite.”

I honestly imagine the response of society to "going Galt" would be that no one would notice or, at worst, the rest of us would see it as an opportunity for even more wide-spread populism, and an opportunity for those of us shut out from the world of the "elites" precisely because they drew up the ladder and want to keep the boot in our face, and not because their superiority in any measure placed them far above us.

But the silliness of the post is in the argument that Obama is somehow enabling these whiners with his economic policies. I've noticed before that those without responsibility for a situation see it abstractly, a matter of predicting the future and then declaring the present must conform to the expectations of what could, or should, come. I also note that very few people have anything better than a badly cracked crystal ball. Dr. Roubini may have been right that the economic conditions could not sustain forever; that does not mean he's right about what can be done about this situation now.

Not because Dr. Roubini has reached the limits of his knowledge (nor Dr. Krugman, for that matter) but because neither Rubini, or Krugman, nor the bloggers, are responsible for what happens next. It's quite a different matter to offer abstract and theoretical solutions to problems, than to be responsible for what is happening today, and for the consequences of your actions in the future. To make one simple observation: if the Administration decided to take over AIG, which has effectively underwritten the world financial markets and whose collapse would introduce chaos into those markets on a level that would, as Ben Bernanke has told Congress, would mean we'd stop talking about the "Great Depression" and mean 1929, what would happen if it turned out to be too big not only to fail, but to bail out? At the moment, the world markets all happily persist in the illusion that Citi and AIG and other institutions are solvent, when anyone can see they are not. We are all agreeing the emperor has lovely clothes, because we can't risk the catastrophe which might occur if we started acknowledging the emperor is naked. To switch metaphors, if the towering inferno of toxic assets started to fall because of government action, and the government couldn't stop it (if only because the estimates of the value of those assets on the books of these international institutions exceeds the GDP of almost all the countries of the industrialized world, combined): what would happen? If the tower starts toppling, who will stop its fall?

It may be the tower is going to topple anyway, and nothing we can do will stop it. But none of us have a crystal ball that clear and accurate. And is it better to push the tower over and be done with it? Can we really afford that risk?

Let he or she who has returned from the future with perfect knowledge give us the correct answer.