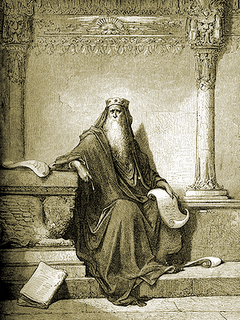 So why do we care when Stephen Hawking trots out an old chestnut about heaven=myth, and adds to it the equally old chestnut that when you die, that's it? I mean, why does this even make the news? Because Stephen Hawking said it? But what does he know about matters theological?

He may be as qualified as I am to speak on matters of the heart, but would anyone listen if he opined that love was a myth, and it was all a matter of pheromones and hormones and neurons firing? Would anyone give such statements any real attention?

And when he trots out this old canard:

In an interview published Monday in The Guardian newspaper, the 69-year-old says the human brain is a like a computer that will stop working when its components fail.

He says: "There is no heaven or afterlife for broken-down computers; that is a fairy story for people afraid of the dark."

I first want to question his analogy. A computer? Really? Why isn't it like a pocket watch? Or an adding machine? Or simply a receptor for sensory impressions? All three analogies have been offered at one time or another (the last is David Hume's, and my personal favorite. I always imagine an empty room with a wall of TV screens presenting images no one is there to look at. If, as Hume said, the self is just an illusion created from all that sensory input, who is deciphering the sensory input and remembering it? It would seem a better analogy for Mr. Hawking, if he wants to be such an absolute empiricist). Why is the computer the superior comparison?

But more directly, I'd point Mr. Hawking to Socrates' discussion of the soul in the Phaedo. Socrates made an argument for the existence of the soul so compelling it persists to this day; which is not to say, however, that Socrates was right. On the other hand, if you are going to dismiss Socrates as just another person "afraid of the dark," I am going to dismiss your argument out of hand, too. And I'm going to ask myself: "Why should I care what you think on this subject?"

So why do we care? Why do we worship at the shrine of "science" so much that Stephen Hawking can wander freely into other fields and determine their worth and merit based on his assumptions and, frankly, ignorance. I don't know what concept of "heaven" Mr. Hawking has, but it's a fairly elementary one. And there is some kind of supreme arrogance in dismissing several millenia of human thought and experience with the statement "I don't agree (and therefor you are all fools!)." It was an acceptable enough position in 19th century Europe, when educated white males convinced themselves they were superior to people younger than them (children) and non-males, and all persons of other "races," a concept they came up with to conveniently classify the bulk of the world as inferior. Is Mr. Hawking really so arrogant as to presume he knows better and more fully than all of humankind across history? It is indeed possible that he does. But we usually call such people "cranks." We don't usually honor them with respect for and publication of their every utterance.

So why do we publish the opinions of Stephen Hawking as if they matter? Because he's so much more intelligent than we are? Anyone who dismisses Socrates without even a mention, and implicitly defines him as a child afraid of the dark, doesn't strike me as more intelligent than I am. Certainly he understands physics better than I do, but since when did physics become the bedrock and benchmark of all human knowledge?

But here is the central problem: there are arguments for, and there are arguments against. The latter don't establish a proposition, so much as try to defeat one. Kierkegaard understood this about the "Socratic method." It was, he realized, merely the application of irony to all situations, the application of the "con" argument, without any establishing "pro" to justify it. It is, as Rabbi Hirschfield points out, not the same thing to deny something, as it is to prove something doesn't exist. Arguments pro, as Kierkegaard pointed out, are very complex, and sometimes impossible, while arguments con are simple and easy to construct. But they don't actually construct anything.

Irony...has no purpose, it's purpose is immanent in itself, a metaphysical purpose. The purpose is none other than irony itself. When an ironist exhibits himself as other than he actually is, it might seem that his purpose were to induce others to believe this. His actual purpose, however, is merely to feel free, and he is through irony....

For irony everything becomes nothingness, but nothingness may be taken in several ways. The speculative nothingness is that which at every moment is vanishing for concretion, since it is itself the demand for the concrete...The mystical nothingness is a nothingness for representation, a nothingness which yet is as full of content as the silence of the night is eloquent for one who has ears to hear. Finally, the ironic nothingness is that deathly stillness in which irony returns to 'haunt and jest' (this last word taken wholly ambiguously.)(Soren Kierkegaard, The Concept of Irony, tr. Lee M. Capel (Bloomington, Indiana; Indiana University Press 1968, 273-75)

Now if Mr. Hawking wants to take that on, we can have a discussion. But so long as he wants to throw stones at other people who don't think like he does, then, in the words of that eminent 20th century philosopher Nigel Molesworth: "I diskard him."

Update: Rabbi Hirschfield was on BBC's "World Have Your Say" and acquitted himself very well. I'll admit to more than a little pleasure at listening to a person of faith discuss matters religious with a humanist, and refusing to use any of the platitudes the humanist expected to hear.