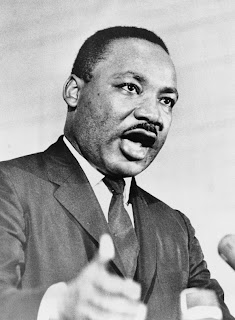 Nothing to say I haven't said before. Except to underline the point, that Dr. King was in Memphis supporting a sanitation worker's strike for economic justice. Or, as the quoted material in the post says:

Little Dovie realised, as Martin Luther King did, that the struggle and the civil rights movement wasn't just about race, but rather a far bigger issue of understanding power and class distinction.

Remember that every time a GOP Presidential candidate talks about the evils of "class warfare" or "the bitter politics of envy."

Dr. King was not envious.

(*corrected due to the kindness and attentiveness of a reader)