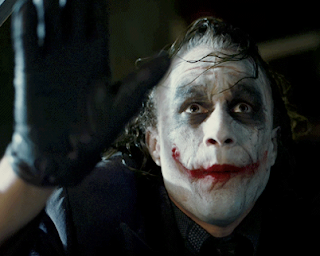 The iconic line of Heath Ledger's Joker, after which, of course, nothing happened.  Well, what he expected didn't happen.  And while this AP article breathlessly reveals that "traditionalists" have had it with the new Pope already, don't expect any fireworks anytime soon.  Art sometimes imitates life that way.

Francis’ decision to disregard church law and wash the feet of two girls — a Serbian Muslim and an Italian Catholic — during a Holy Thursday ritual has become something of the final straw, evidence that Francis has little or no interest in one of the key priorities of Benedict’s papacy: reviving the pre-Vatican II traditions of the Catholic Church.

I am not competent to speak on how much Pope Emeritus Benedict tried to revive pre-Vatican II liturgical practices while still, presumably, trying to uphold the Vatican II theological changes he championed during the actual Vatican II council, but it strikes me as about the right direction to be going.

My theology is not all that radical.  I don't support any of the claims of process theology, which seems to have already fallen by the boards; and I'm not that enthusiastic about the claims of Bultmann, for example, influential though he has been.  My theology is based more in Kierkegaard and Derrida than Heidegger, and more in tradition than not.  In the traditions of Julian of Norwich and the Christian mystics, I hasten to add; and in liberation theology's preferential option for the poor. I digress, but only to say my theology is hardly either mainstream or that radical, not quite traditional but not nearly modern enough, and yet I am, as Benedict is described in this article as being, a great fan of liturgical worship.  Not, however, the liturgical style of Benedict; my sympathies are more with Francis.

I wore the black robe of Martin Luther, the robe of a professor, a teacher, rather than the alb of the Roman worker.  I was too Protestant and Presbyterian to bring myself to wear the alb, although my sympathies were with the garment of the workers.  Had I been radical enough to follow that tradition properly, I'd have taken the pulpit every Sunday in a t-shirt and blue jeans, probably wearing work boots.  We lose so much by sticking so literally to traditions.  It's not too much to say we are all literalists, after a fashion.

Francis, of course, is making minor, subtle changes, compared to a priest dressing as a modern-day laborer in the pulpit.  He is trying, in his own way, to express the humility of Christ.  And, predictably, somebody somewhere doesn't like that:

One of the most-read traditionalist blogs, “Rorate Caeli,” reacted to the foot-washing ceremony by declaring the death of Benedict’s eight-year project to correct what he considered the botched interpretations of the Second Vatican Council’s modernizing reforms.

“The official end of the reform of the reform — by example,” ”Rorate Caeli” lamented in its report on Francis’ Holy Thursday ritual.

What is wrong with the Holy Thursday ritual?  Well, that is actually quite interesting.  It seems the Pope violated canon law.  Or maybe just ecclesiastical law.  I'm not being glib to say I'm not sure, and I don't take the AP's word for it.  There is a rule about footwashing which, again, adheres strictly and literally to tradition, as that tradition is preserved by the Gospel of John (the only story we have of Jesus washing anybody's feet):

There were certainly none of those trappings on display Thursday at the Casal del Marmo juvenile detention facility in Rome, where the 76-year-old Francis got down on his knees to wash and kiss the feet of 12 inmates, two of them women. The rite re-enacts Jesus’ washing of the feet of his 12 apostles during the Last Supper before his crucifixion, a sign of his love and service to them.

The church’s liturgical law holds that only men can participate in the rite, given that Jesus’ apostles were all male. Priests and bishops have routinely petitioned for exemptions to include women, but the law is clear.

Francis, however, is the church’s chief lawmaker, so in theory he can do whatever he wants.

“The pope does not need anybody’s permission to make exceptions to how ecclesiastical law relates to him,” noted conservative columnist Jimmy Akin in the National Catholic Register. But Akin echoed concerns raised by canon lawyer Edward Peters, an adviser to the Vatican’s high court, that Francis was setting a “questionable example” by simply ignoring the church’s own rules.


Again, my sympathies are with liturgy being conducted properly.  But I'm Protestant enough to pray with the E&R Church Hymnal:


Grant that thy Church may be delivered from traditions which have lost their life, from usage which has lost its spirit, from institutions which no longer give life and power to their generation; that the Church may ever shine as a light in the world and be as a city set on a hill.

Law, as any lawyer will tell you, tends to ossify things. Sometimes that's stabilizing; sometimes that's the cold, dead hand of history.  But, of course, this isn't really about tradition, or scripture, or history; it's about power.  And humility is about power; at least to some people:

“He cultivates a militant humility, but can prove humiliating for the church,” Bouchacourt said in a recent article, criticizing the “dilapidated” state of the clergy in Buenos Aires and the “disaster” of its seminary. “With him, we risk to see once again the Masses of Paul VI’s pontificate, a far cry from Benedict XVI’s efforts to restore to their honor the worthy liturgical ceremonies.”

I saw that coming; I just didn't think it would come quite this fast.  I submit it was evidence that, as powerful as the office of Pope is reputed to be, it's still just a pastorate; and somebody always complains about how the new guy doesn't do things the way the old guy did.