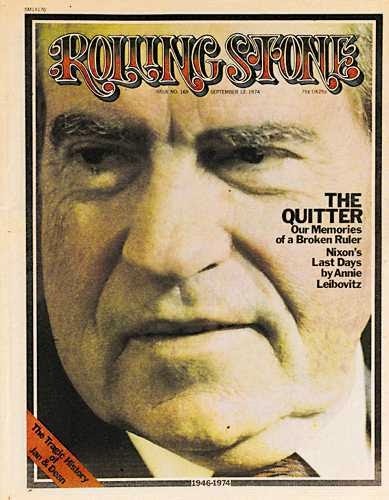 Memory, as the poet said, fails me at length.  I had this issue in '74, but remembered a grainy picture of Nixon, a screenshot from the TV as he gave his resignation speech, and the typeface large and white.  Maybe it was just my hatred of Nixon, one borne mostly of the war I just avoided being drafted for (I was in the last year of the draft, but had a high number).  I wanted to make this a little more jarring than it was.

It was good enough that I kept it proudly in my stack of RS magazines, the old newspaper/tabloid style RS started with.  The newest issues went on top of the stack, but always below this one.

Even if my memory is faulty, it's still my favorite magazine cover.