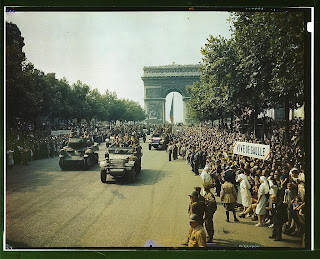 When the sight of trucks lining your street, trucks with cherry pickers on them and labels that indicate they are from power companies, not tree trimmers, when that vision makes you feel like it must have felt to be in Paris for the liberation, you really know you're on the Gulf Coast. You want to run into the street and throw your daughters at them, shower them with champagne, beg them for chocolates, weep openly and unashamedly.

That's when you realize technology has you by the short hairs; but you just don't care. You want lights at night. You want to watch television. You want air conditioning. Most of all, you want refrigerated food again, in your own kitchen, cooked on your own stove. You want to go the store and buy all the ice cream your freezer will hold, and then go buy another freezer, and fill that one, too. And stuff your refrigertor with eggs and milk, and maybe get a second, bigger refrigerator to just stock with beer so you can share it with guys like this. And when they restore the shattered poles and restring the drooping power lines in only one day, a job you were sure would take weeks, you briefly consider marrying your teenage daughter off to them right then and there, so profound is your gratitude. But then they stand by their trucks for an hour or more, and nothing happens; and then they drive away. And you understand that, like a watched pot, nothing will come to a boil, no consummation will be observed or televised, and you must leave and let them return when you aren't watching, when you aren't even capable of watching.

So the next day, while you are gone, while you are at work, they return. You see them early in the morning, collected in a massive huddle of trucks at the end of your neighborhood: one man high in a cherry picker bucket, working with hand tools; the rest standing about their trucks, waiting for orders or something to happen. You leave, and when you come back, they are gone. You scarcely dare believe the miracle has occurred, especially since all the lights are still out in the houses around you. But maybe that's just because it's dusk...maybe that's because it isn't fully dark yet, or people have not yet come home to see, or they haven't thrown all their breakers either.

You step out to the two breaker boxes in the back yard; the old, original one, the newer one that replaced it, but didn't, and curse once again the former owners and their strange remodeling ways. Nothing to do for it but start throwing switches and hope new energy to the crumpled garage doesn't spark a fire in the night. No lights are on, all major appliances have been unplugged, so you have to go inside to see if the genies have returned, if the magical elves of entertainment and the pixies of refrigeration once again dwell beneath your roof. You are almost afraid, almost tentative to reach for a light switch. You feel for a moment like someone in rural America in the '30's who has just had his house wired for electricity thanks to FDR's "New Deal."

And then the lights are on and two weeks of 19th century living fall away as if they'd never been, and you remember how good it is to have light and air conditioning and TeeVee and, most of all, refrigeration. The hum of the freezer is like a chorus of angels; the purr of the refrigerator is the loveliest sound you've heard since your honeymoon, when you just listened to your wife sleep beside you, in awe and wonder at the miracle of it.

By the next day, it's off to the grocery store to restock and replenish, and plan meals. Already you wake up wondering where you put normal, so you can slip back into it.