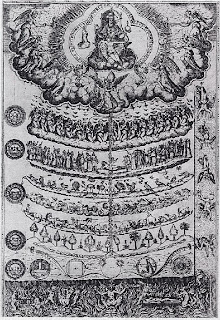 David French acknowledges the obvious now: he's what he thinks a Calvinist should be.

Earlier this week, Walter Russell Mead highlighted disturbing research showing that the poor — far more than the rich — are disconnected from church and religion. While church attendance is dropping among all social classes, it’s falling off a cliff for the poorest and least-educated Americans. In other words, the deeper a person slides into poverty, the more they’re disconnected from the very values that can save them and their families.

The bottom line is that we need more free enterprise, and we need more virtue. Sadly, the Great Society and the sexual revolution have deprived us of both.

The causal analysis of that final statement is laughable, but the interesting issue is the assumption that church attendance is associated with virtue, or even that it is proof of one's election to salvation and eternal life. Ask any honest pastor, or church member, about that assumption, and see if they agree only the virtuous go to church. His presumption is, again, laughable.

Walter Russell Meade's analysis, by the way, comes down to this observation:

By what we teach and what we don’t teach, what we talk about and where the silences are, we convey clear messages to young children. We have been broadcasting a clear message to two generations of young people that religion doesn’t matter.

Which undercuts both Meade's observation that the poor are suffering from our societal neglect of religion (why are the wealthy more likely to go to church? Are they not listening to what we've been broadcasting?) as it undercuts French's opinion. If we are telling everyone in America that religion doesn't matter, then the problem is not the weakness of the poor. If, on the other hand, we are telling the rich they are God's chosen.... For French's argument, though, if the poor don't go to church because they are shiftless and immoral and damned anyway (clearly not among the Elect), then Meade's analysis is not only inapposite, it's wrong.

The other problem with French's argument,though, is that it's not based on the sociological research:

The study also shows that Americans who make more money attend religious services more frequently, and that Americans who have been unemployed at any point in the past 10 years attend services less frequently. The study found that people who are married, who do not approve of premarital sex and those who lost their virginity later than their peers also attend services more often.

“While we recognize that not everyone wishes to worship, and that religious diversity can be valuable, we also think that the existence of a large group of less educated Americans that is increasingly disconnected from religious institutions is troubling for our society,” says Andrew Cherlin, co-author of the study and a professor of sociology and public policy at the Johns Hopkins University. “This development reinforces the social marginalization of less educated Americans who are also increasingly disconnected from the institutions of marriage and work.”

The root of the problem, as Meade understood, is in society, not in the character of the poor. French is pulling that supposed cause out of thin air. He may think he's started a discussion, but he's started one based on a fiction, which means it is not an argument that will ever reach a valid conclusion.

Basing arguments on fictions, however, doesn't seem to be a problem for someone who can write a sentence like this:

Christ laid down his life to save a lost and sinful people. When we fail to follow His example, we have only our own depravity to blame.

I have no idea what sacrifices Mr. French has made, but unless he is already dead, he cannot begin to raise such a standard as the only possible one for a believing Christian. I honestly don't think it is my own depravity which has kept me alive all these years.