The Night After the Night Before Christmas 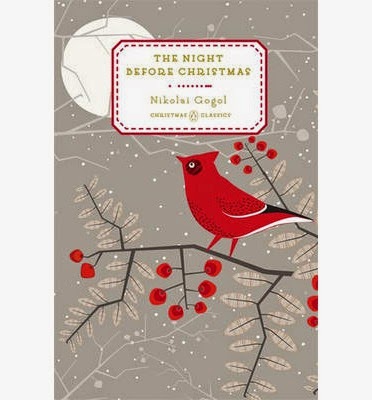 I have a habit of picking up Christmas books at Christmas time.  It's not a good habit, or a bad one; but it has allowed me accumulate an eclectic shelf of stuff, some really good (Christmas at the New Yorker; A Literary Christmas), some which I should probably discard (no, I won't name names!).  Just before Christmas I grabbed a copy of Nikolai Gogol's The Night Before Christmas at my favorite bookstore.  This morning I opened it.

Now, recently, I'd read an article at Slate about how physics killed Santa Claus, not maturity or skepticism or older kids cluing in younger kids at school (I think that's how I heard it).  It strained credulity to argue young children are budding physicists who intuit the laws of the universe like velocity and volume and solids not being liquids (Santa in the chimney), but okay, whatever.  Of course it's "scientific," being based on one study by one scientist of a limited number of children, none of the conclusions of the study having been confirmed by further studies among other populations or anything like that (nor likely to be; how many people really want to find out why kids stop believing in Santa Claus as a scientific endeavor?).  But these kinds of discussions are often based on what is actually only anecdotal evidence, so take it for what it is and move one.  Besides, it was the end of the article that really caught my attention:

Shtulman says it’s an interesting question “whether children are as skeptical of the extraordinary properties of religious beings as they are of the extraordinary properties of Santa, at least later in development.” If they are, atheists who want to recruit new members to their growing movement should take note. Perhaps young children simply need to be exposed to a few more Grinches to encourage their natural skepticism.

Of course this is an old discussion.  Protestants have been accusing Catholics of "superstition" since the day of Luther and Calvin, and the Catholic church was at pains to distinguish its doctrines and proclamations from superstition since the days of Iraneus.  I won't belabor that discussion, except to say it's pretty much settled among anthropologists (you know, scientists), and bringing it up in atheist discussions is both de rigeur and kind of ignorant.  The argument of the article is that we can't possible accept any story that includes fantastical elements because, well....obviously, right?

Gogol, the head of the Naturalist school in Russian literature, opens his Christmas story with a witch flying up and catching all but three or four stars in the night sky on Christmas Eve in her sleeve.  A devil then leaps up to the moon and puts in his pocket.

What are we to make of this?  It isn't possible.  It defies the laws of physics.  This must be a story for a child; a particularly credulous child.  And yet it is hardly that.  What's going on here?  My natural skepticism says I should toss this story aside; and yet, I read on.

In the same way our culture embraces Santa Claus.  Adults wink with Clement Moore, and even older children don't burst the bubble of belief that allows young children to accept the magic of Christmas morning.  Long after that bubble bursts, those children grow up to teach their children about Santa Claus.  If it were so harmful, so much a "superstition," surely the entire culture would have thrown the story over by now.  It isn't as if Santa Claus were a religious figure.  When you see Santa kneeling at the manger, the message is clear:  the secular world should bend a knee at the crib of the Christchild.  But you never see Santa in a live Nativity.

As for the "extraordinary properties of religious beings," what would those be?  The reality of God?  The existence of God?  Existence itself is an extraordinary property of the physical universe.  Can a physicist define "existence"?  Can science explain why life begets life, and yet inert matter cannot be "given" this thing called "life"?  Can science explain what death is, except the cessation of the activities we loosely call "life"?  What is more extraordinary than consciousness itself?  And what is that?  The emergent property of neurons?  The product of a critical mass of synapse connections?  Where does it come from?  Where does it go?

God is not Santa Claus.  No Christian doctrine teaches that God works as Santa does.   If God is extraordinary, that lies in the very definition of "God."  Santa is extraordinary, too, but ultimately just a mish-mash of stories.  When toys were made by hand in the barn out back,  Santa could have a workshop that cranked them out.  Buddy the Elf may strain to keep up his quota of Etch-a-Sketches, but it got hard to argue the elves were making those things we saw on TV.  Now car companies tell fanciful tales of how Santa could deliver a luxury automobile in a sleigh drawn by eight tiny reindeer.  Does even the most credulous child pay attention to this?  Or do they just pay attention to the idea that the universe is ultimately good, and just, and even kind?  And if you want to take that away from them, then you are worse than the Grinch.

Even Ebenezer Scrooge would cross the road to avoid you.

I'll let you know how the Gogol story turns out.