None Dare Call It Racism 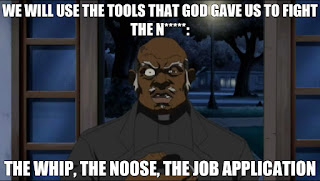 But really, I don't know what else to call it:


I suppose it's not "hate speech," and Bachman is not from the "Jim Crow South;" but still, the linkage of the "wrong" kind of voters being brought "in to the country" and "somebody who will stand up for godly moral principles" couldn't be much clearer.

You don't have to be a dog to hear that whistle blow.  And you know she'd disavow any racial animus, and be truly insulted by the mention.

And to prove there is always an Uncle Ruckus to be found among us:

"My culture is a very dominant culture. And it's imposing, and it's causing problems. If you don't do something about it, you're going to have taco trucks on every corner," Gutierrez said.

No, I don't know what the problem with taco trucks is, either.  Nor did I realize his culture was so dominant and imposing.  Curiously, most people are proud to make that statement.