Heaven and earth will pass away.... 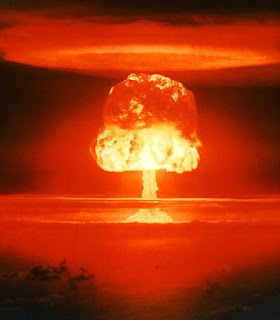 I received this in an e-mail recently.

A German's View on Islam

A man, whose family was German aristocracy prior to World War II, owned a number of large industries and estates. When asked how many German people were true Nazis, the answer he gave can guide our attitude toward fanaticism.

'Very few people were true Nazis,' he said, 'but many enjoyed the return of German pride, and many more were too busy to care. I was one of those who just thought the Nazis were a bunch of fools. So, the majority just sat back and let it all happen. Then, before we knew it, they owned us, and we had lost control, and the end of the world had come. My family lost everything. I ended up in a concentration camp and the Allies destroyed my factories.'

Today, we are told again and again by 'experts' and 'talking heads' that Islam is the religion of peace, and that the vast majority of Muslims just want to live in peace. Although this unqualified assertion may be true, it is entirely irrelevant. It is meaningless fluff, meant to make us feel better, and meant to somehow diminish the spectra of fanatics rampaging across the globe in the name of Islam.

The fact is that the fanatics rule Islam at this moment in history.

It is the fanatics who systematically slaughter Christian or tribal groups throughout Africa and are gradually taking over the entire continent in an Islamic wave.

It is the fanatics who bomb, behead, murder, or honor-kill.

It is the fanatics who take over mosque after mosque.

It is the fanatics who zealously spread the stoning and hanging of rape victims and homosexuals.

It is the fanatics who teach their young to kill and to become suicide bombers.

The hard quantifiable fact is that the peaceful majority, the 'silent majority,' is cowed and extraneous.

Communist Russia was comprised of Russians who just wanted to live in peace, yet the Russian Communists were responsible for the murder of about 20 million people. The peaceful majority were irrelevant.

And, who can forget Rwanda, which collapsed into butchery. Could it not be said that the majority of Rwandans were 'peace loving'?

History lessons are often incredibly simple and blunt, yet for all our posers of reason we often miss the most basic and uncomplicated of points:

Peace-loving Muslims have been made irrelevant by their silence.

Peace-loving Muslims will become our enemy if they don't speak up, because like my friend from Germany, they will awaken one day and find that the fanatics own them, and the end of their world will have begun.

Peace-loving Germans, Japanese, Chinese, Russians, Rwandans, Serbs, Afghans, Iraqis, Palestinians, Somalis, Nigerians, Algerians, and many others have died because the peaceful majority did not speak up until it was too late.

As for us who watch it all unfold, we must pay attention to the only group that counts; the fanatics who threaten our way of life.

Lastly, anyone who doubts that the issue is serious and just deletes this E-Mail without sending it on, is contributing to the passiveness that allows the problems to expand.

So, extend yourself a bit and send this on and on and on! Let us hope that thousands, world wide, read this and think about it, and send it on - before it's too late.

The appeal to authority through the reference to "German aristocracy" is especially telling here. That this is apocryphal rather than real I do not doubt. Among other claims here, I don't know how the "50 wars worldwide" (quick! Name them!) are connected to Islam. There was some loose talk early on in the terrorist attacks in Mumbai that the operation resembled al Qaeda's methods, until those very same actions were said to mark it is NOT an al Qaeda operation. Now, of course, we're all talking about Pakistan's involvement, and it may have nothing to do with religion at all.

So there's that. Then there's the central thesis of the argument, which boils down to something a similiarly-minded radio host said:

Now, of course, again we come back to, "Yes, but there's a lot of peaceful Muslims on the planet Earth." Well, that's true. But if I'm in a room with a thousand people, and 999 of them love me, but one has a gun and wants to kill me, how relevant are the 999? They have no relevance whatever.

But there's also this, which has nothing to do with religion either, but a lot to do with who wants to kill whom:

I learned in Iraq that the No. 1 reason foreign fighters flocked there to fight were the abuses carried out at Abu Ghraib and Guantanamo. Our policy of torture was directly and swiftly recruiting fighters for al-Qaeda in Iraq. The large majority of suicide bombings in Iraq are still carried out by these foreigners. They are also involved in most of the attacks on U.S. and coalition forces in Iraq. It's no exaggeration to say that at least half of our losses and casualties in that country have come at the hands of foreigners who joined the fray because of our program of detainee abuse. The number of U.S. soldiers who have died because of our torture policy will never be definitively known, but it is fair to say that it is close to the number of lives lost on Sept. 11, 2001. How anyone can say that torture keeps Americans safe is beyond me -- unless you don't count American soldiers as Americans.

Most of us don't, of course, count soldiers as Americans. Otherwise we might question the wisdom of responding to the deaths of 3000 Americans by destroying two sovereign nations and killing 4000+ more Americans in the process, as well as a hotly disputed number of Iranians and Afghanis. All I hear (in the media, at least) is that Americans are "tired of war." There seems to be no national revulsion, no national outrage at the number of American soldiers killed in Iraq that is anywhere comparable to the outrage 9/11 still stirs.

Maybe it's a matter of who's culpable in each situation. Or maybe it's a question of scarcity and abundance. So long as security is scarce, fear will thrive in abundance; which will shrink security even further, until it doesn't exist at all. Security, we are told, is not obtained through peace but through war; because war centralizes control over security, until war is peace. We should learn instead from Jeremiah:

Justice and right do not flow from power, nor from wealth, nor even wisdom or valour. They flow from the unfailing love of God. And the price of that love, is vulnerability.

Fanatics tell us violence is the only way to peace, that war is the only way to safety, that death is always deserving for people who are not like us. Fanatics tell us that our principals are what make us great, but those principles must not hold us back from using barbarism in the name of civilization because, after all, savagery is all "they" understand. Where, then, is room for the unfailing love of God, for the vulnerability of love that leads to justice and right on the earth, for the power of powerlessness?

Where is there room for the child in the manger, the child so helpless it must rely on its parents to flee Herod's danger, Herod's certainty that his power will prevail against an innocent? The proclamation of that child will be that power's source is in the fear of scarcity. Herod thought it was a zero-sum game, that it was him or the child. And which do we worship? The child? Or the King who would kill him? Are we the helpless? Or are we the act of God? 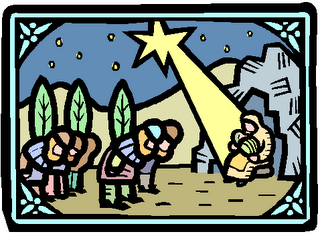