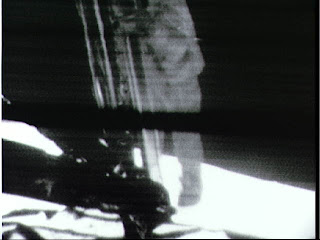 I have some photos of the moon landing. They're as grainy and gray and fuzzy as the pictures you've seen recently, from the TV broadcast. I still remember Walter Cronkite giving the technical details for photographers, to adjust their cameras to get the best picture from the TV screen. A friend with a darkroom and an interest in photography took them and made copies for me, so they're on curling photography paper from a garage dark-room, not professional prints on Kodak paper.

I used to have a map of the moon, too. The near side, and in black and white (I think Calvin's Dad was right, sometimes, and the world was in black and white in the past). It hung on my bedroom wall, and I marked the places of the moon landings on it. I even built some of the Revell kits of the Mercury and Gemini and Apollo rockets and capsules. At one point I had a model of the Lunar Module, if memory serves. I still remember when the acronym for it went from LEM, for Lunar Excursion Module, to LM, for Lunar Module. I still called it "LEM" for a long time.

I remember the night of the moon landing. I remember the den where I watched it, in a friend's house, with my family and theirs. I remember Walter Cronkite talking, I remember the amazing pictures actually coming from the Moon. But my strongest memory is the one no one has talked about, although to me it was even more amazing. In this age of giant TV screens and international communication, where I can pick up a phone and talk to my daughter in Brooklyn as if she was in the next room, and always know I'll get her because I'm calling her cell phone, in this age where everybody knows, or can know, what's going on anywhere in the world at any time, where I can read newspapers from around the world at my desk, this memory is wholly unremarkable. But it shouldn't be, anymore than the moon landing should be unremarkable.

I hear now that we went to the moon to beat the Soviets, and I remember the "space race." But while it felt that way for the 7 original Mercury astronauts, it no longer felt that way by 1969. I don't remember feeling triumph at having defeated the Russian advance into space, which, after all, had disappeared by then. What I remember was the wonder when Walter Cronkite showed us that people around the world were waiting for Neal Armstrong to be the first human being to set a foot on the surface of the Moon.

This was extraordinary, too; and possibly as unprecedented in human history as the moon landing itself. Around the world, despite the hour of the day depending on what point on the planet people were, people were gathered around television screens waiting to see the amazing sight. It was a human effort that day, not a USA effort. It was humankind that set foot on that dusty surface, not just an American. Everyone everywhere, the TV told me, the pictures told me, was watching: watching, and for the moment, the hour, the event, feeling the same emotion. It wasn't a magical Hollywood moment, but it gave a sense of common humanity, of shared experience, of how much more alike we are than different.

It was a technological triumph. But the response was almost....spiritual.