The Institute of Official Cheer*

"Today's terrorists can strike at any place, at any time, and with virtually any weapon."--Department of Homeland Security 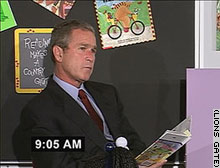 Were I to take my life in my hands this weekend and visit Osama bin Laden's hideout in Wherever-istan, the interview would go something like this. I would ask how things have been for him since 9/11. His reply would be that he had worried at first that America would capitalise on the global revulsion, even among muslims, and isolate him as a lone nutcase. He was already an "unwelcome guest" among the Afghans, and the Tajiks were out to kill him for the murder of their beloved leader, Massoud (which they may yet do). A little western cunning and he would have been in big trouble.

In the event he need not have worried. Bin Laden would agree, as did the CIA's al-Qaeda analyst in Peter Taylor's recent BBC documentary, that the Americans have done his job for him. They panicked. They drove the Taliban back into the mountains, restoring their credibility in the Arab street and turning al-Qaeda into heroes. They persecuted muslims across America. They occupied Iraq and declared Iran a sworn enemy. They backed an Israeli war against Lebanon's shias. Soon every tinpot islamicist was citing al-Qaeda as his inspiration. Bin Laden's tiny organisation, which might have been starved of funds and friends in 2001, had become a worldwide jihadist phenomenon.

I would ask bin Laden whether he had something special up his sleeve for the fifth anniversary. Why waste money, he would reply. The western media was obligingly re-enacting the destruction and the screaming, turning the base metal of violence into the gold of terror. They would replay the tapes and rerun the footage ad nauseam, and thus remind the world of his awesome power. Americans are more afraid of jihadists this year than last, up from 72 per cent to 79 per cent (according to 'Transatlantic Trends') as are the British. As for European support for America's world leadership, that has plummeted from 64 per cent in 2002 to 37 per cent.

Bin Laden might boast that he had achieved terrorism's equivalent of an atomic chain reaction: a self-regenerating cycle of outrage and foreign policy overkill, aided by anniversary journalism and fuelled by the grim scenarios of security lobbyists. He now had only to drop an occasional CD into the offices of al-Jazeera, and Washington and London quaked with fear. The authorities could be reduced to million-dollar hysterics by a phial of nail varnish, a copy of the Koran or a dark-skinned person displaying a watch and a mobile phone.

The gruelling re-enactment of the London bombings in July and this weekend's 9/11 horror-fest are not news. They exploit grief and horror and in doing so give gratuitous publicity to bin Laden and al-Qaeda. Those personally affected by these outrages may have their own private memorials. But to hallow the events with repetitious publicity turns a squalid crime into a constantly re-vitalised political act. It grants the jihadists was they most crave, warrior status. It more than validates terrorism as a weapon of war, it glorifies it.

The best way to commemorate 9/11 is with silence. Instead, bin Laden must be laughing.