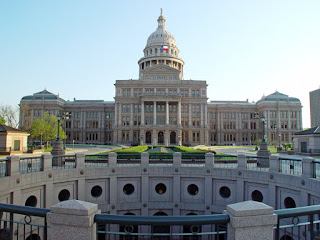 Some frequent visitors to the Texas Capitol in Austin are obtaining concealed handgun licenses in order to gain quicker access through the building's security screening, Reuters reports.

Concealed handgun license holders can enter the Capitol via an expedited "CHL access" line, while "schoolchildren and tourists" have to pass through metal detectors, according to the report.

The metal detectors were installed last year, after a gun was fired on the Capitol's steps. State troopers are stationed in the "CHL Access" line to ensure the licenses are valid.

Carrie Kroll, director of advocacy and health policy for the Texas Pediatric Society, recently got her concealed handgun license in order to gain quicker access.

Some lobbyists and even journalists have also applied for the licenses, despite having no intention to carry a gun.

State Sen. Dan Patrick (R) said he carries a handgun with him at the Capitol at almost all times.

"I don't ever want to be in a situation where I don't have the chance to defend myself, my family or my friends," he said. "We live in a world where you can encounter danger at home or work or on the street."

The gunman from last year, Fausto Cardenas, visited Patrick's office before firing shots on the Capitol steps, according to the report. No one was injured.

"Around here, it's not that big of a deal (to have a gun at the Capitol)," said Richard Robertson, who visited the Capitol over the weekend. "Someone from out of state may think we're a bunch of yahoos."

Born here, raised here, lived here almost all my life (including a very long stint in Austin, where I never worried about someone pulling a gun on me.) And based on this story, I think you're a bunch of yahoos.