When "essential" means "For Men Only" 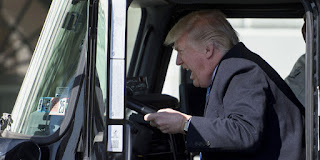 What the President did today.  No, seriously.


I don't know where Nancy Pelosi gets these ideas:


40,000 US women will die from breast cancer this year. But Republicans think taking away coverage for mammograms is funny. #TrumpCare https://t.co/249J5WdUKi
— Rep. Barbara Lee (@RepBarbaraLee) March 23, 2017

But Sen. Roberts apologized, so it's all good:


I deeply regret my comments on a very important topic. Mammograms are essential to women's health & I never intended to indicate otherwise.
— Pat Roberts (@SenPatRoberts) March 23, 2017


Except he didn't apologize to Alice Ollstein personally, or even attach his sentiment to her tweet, and he only apologized on Twitter, which means some staff person wrote it for him to c.his a. after speaking so injudiciously, but hey, it's the new etiquette, or something.  Right?

Now, is he going to refuse to back a bill that doesn't include the 10 essential health benefits required under Obamacare?  Because I keep hearing the AHCA will be a "better" bill.....(and the funny part is, that bone thrown to the Freedom Caucus has caused "moderate" Republicans to withdraw their support, and killed the vote scheduled for today.  So much winning!)  And it's all good because:

"The president's engagement [in the legislative process] is unparalleled in the history of our country," Freedom Caucus leader and North Carolina Rep. Mark Meadows said at the Capitol moments ago.


As health care vote gets scrapped for tonight, here's Trump in a big rig on the White House driveway honking the horn & pretending to drive pic.twitter.com/vTkNnJkrrc
— Steve Kopack (@SteveKopack) March 23, 2017