I can see I have no choice but drag this back out: 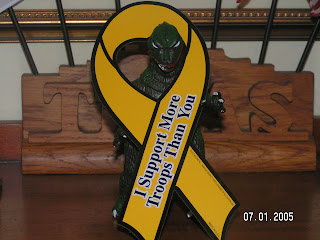 Why? Well, because of this:

As war protesters marched toward Arlington Memorial Bridge en route to the Pentagon yesterday, they were flanked by long lines of military veterans and others who stood in solidarity with U.S. troops and the Bush administration's cause in Iraq. Many booed loudly as the protesters passed, turned their backs to them or yelled, "If you don't like America, get out!"

Of course, what's really interesting is the language being used:

The vets turned both sides of Constitution into a bitter, charged gantlet for the war protesters. "Jihadists!" some vets screamed. "You're brain-dead!" Others chanted, "Workers World traitors must hang!" -- a reference to the Communist newspaper. Some broke into "The Star-Spangled Banner" as war protesters sought to hand out pamphlets.

"You're brain-dead!" seems a particularly poor choice of words. But that's just ironic. What really disturbed the counter-protesting veterans was the violation of the heilige, the holy, the sacred; which apparently explained their turnout:

The large turnout surprised even some counter-demonstrators. Polls show public opinion turning against the war in Iraq, and the November election was widely seen as a repudiation of the administration's policy.

"I've never been to a war rally. I hoped I'd never have to," said Jim Wilson, 62, a Vietnam vet from New Hampshire. "We're like what they used to call the silent majority."

In some past antiwar rallies, the number of counter-demonstrators has ranged from a handful to a few hundred. "Our side got apathetic," said Debby Lee, whose son Marc, a Navy SEAL, was killed in Iraq and who came to the rally from Phoenix in a caravan organized by MoveAmericaForward.org.

But the war protesters have gone too far, Lee and others said. At a Jan. 27 antiwar rally, some protesters spray-painted the pavement on a Capitol terrace. Others crowned the Lone Sailor statue at the Navy Memorial on Pennsylvania Avenue with a pink tiara that had "Women for Peace" written across it.

Word of those incidents ricocheted around the Internet.

"That was the real catalyst, right there," said Navy veteran Larry Bailey. "They showed they were willing to desecrate something that's sacred to the American soul."

Well before 7 a.m., hundreds of people milled about near the Vietnam Veterans Memorial in an effort to, they said, "occupy the ground" and keep any disrespectful war protesters away.

"This is sacred ground to us," said Rick De Marco, 62, a Vietnam veteran from Cleveland.

K.C. O'Brien, 65, a Vietnam vet from Fairfield, Calif., said: "We believe in freedom of speech. We're here to defend the right of people to say whatever they want. But we will not allow any desecration."

Within days of the spray-painting, people were using he Web to organize, making it their mission to protect the monuments, support the troops and accept nothing less than victory in Iraq.

Can't say I consider the Capitol terrace particularly "sacred to the American soul," nor does a pink tiara on a statue I've never heard of constitute "desecration." Spray painting it might have, but not a tiara and a banner. It's notable that the group which organized the counter-demonstrators hired private security to protect the Vietnam Veterans Memorial. The implications of that unfounded fear of desecration make the parallels between Iraq and Vietnam even more obvious. It's really true: we're always fighting the last war, never the present one. And war has truly become our public religion. When did that happen?

I was thinking about this issue because of this article in the Washington Post:

Four years after the invasion of Iraq, the high and growing demand for U.S. troops there and in Afghanistan has left ground forces in the United States short of the training, personnel and equipment that would be vital to fight a major ground conflict elsewhere, senior U.S. military and government officials acknowledge.

More troubling, the officials say, is that it will take years for the Army and Marine Corps to recover from what some officials privately have called a "death spiral," in which the ever more rapid pace of war-zone rotations has consumed 40 percent of their total gear, wearied troops and left no time to train to fight anything other than the insurgencies now at hand.

The risk to the nation is serious and deepening, senior officers warn, because the U.S. military now lacks a large strategic reserve of ground troops ready to respond quickly and decisively to potential foreign crises, whether the internal collapse of Pakistan, a conflict with Iran or an outbreak of war on the Korean Peninsula. Air and naval power can only go so far in compensating for infantry, artillery and other land forces, they said. An immediate concern is that critical Army overseas equipment stocks for use in another conflict have been depleted by the recent troop increases in Iraq, they said.

Quite bluntly, I'm wondering: why is this a problem?

Before World War II, we didn't have a standing military; not like we do today. A standing military is what Dwight Eisenhower was warning us against; that's the "military-industrial complex" he feared. Europe had the standing armies, and the only reason for standing armies was to go on monarchical or (now, more popularly) imperial adventures. Hard to start a war of belligerence if you don't have a military to do it with. After the invasion of Iraq, can anyone seriously doubt that, now?

But does anyone seriously consider that question, either?

I heard a former military officer on CNN recently, one of three called in to give "expert opinions" on some aspect of the war, say that the Iraqi military had to restore order or the country would be lost. And I wondered: when did we become Sparta? When did we decide that military power was the basis for social stability? Are we really a country of decency and order and freedom because there are regular military patrols of our streets? Didn't we used to call such governments "military dictatorships"?

So why is our military so important to us now? It's a talking point even in left blogistan. I got the link for that article from the Huffington Post. One more "jab" at George W. Bush is that he's "broken" the military. Which, yeah, is good for the irony of it (President with zero military experience treats the military like an extension of his ego, and destroys it in the process), but the assumption is that the military has simply been misused. No one questions our reliance on the military in the first place.

And least almost no one does so out loud. Those who do are "pacifists," which equates, even in left blogistan, with "fools." Pacifists are "idealists" who cannot be taken very seriously because even Reinhold Niebuhr (who was a Christian pastor!) knew we needed a military. But did he? Or did he know that nations sometimes have to go to war, because they have to defend their existence and the lives of their citizens? That's a very different argument from the one that says we need a standing military with bases girdling the globe and the ability "to respond quickly and decisively to potential foreign crises, whether the internal collapse of Pakistan, a conflict with Iran or an outbreak of war on the Korean Peninsula." Seems to me there's a very persuasive argument to be made that American taxpayers and American citizens shouldn't be shouldering the burden of South Korea's existence, Pakistan's form of government, or Iran's choice of how to use uranium. And yet we accept that we must be the first responders in any of these areas.

When did Americans become the world's fire department? And why are we the ones paying for all of this, except that what's good for the arms merchants is good for America? When did Pakistan offer to pony up for the costs of our military bases and weapons systems? When did South Korea offer to pay the cost of housing our military on their soil, or even just replace our men and women with their own? These are very blunt, very practical, seemingly very selfish considerations. So why don't we consider them?

Is it because the military itself is what is sacred to us? Is it because we believe in the Pax Romana, and think freedom comes only at the business end of a sword?

This isn't Vietnam we are "learning" from. This is World War II:

The Army's vice chief of staff, Gen. Richard A. Cody, described as "stark" the level of readiness of Army units in the United States, which would be called on if another war breaks out. "The readiness continues to decline of our next-to-deploy forces," Cody told the House Armed Services Committee's readiness panel last week. "And those forces, by the way, are . . . also your strategic reserve."

Are we expecting another Pearl Harbor, then? Are there storm clouds on the horizon we refuse to see? It was widely reported, and never reputed, that Osama Bin Laden turned his rage on the U.S. not because it betrayed him in Afghanistan after the Soviets left, but because it put military bases on the "holy land" of Saudi Arabia.

We have met the enemy, and he is us. We just refuse to believe it. Maybe our military is broken, not because we have misused it, but because it cannot be used properly. Maybe we were right, before December 7, 1941, and a standing army is simply a source of mischief and misery and misadventure. Maybe it's time we studied our own history a bit more carefully. After all, do we really think death in battle is a holy death? Is our national "soul" really defined by our military history? If war is our religion, does that make Mars our god?