In the spirit of tolerance which marks this blog, we recognize Islamofascism Week with the DCI Counterterrorist Center "Terrorist Buster" Logo: 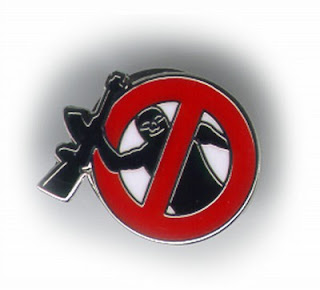 CIA & The War on Terrorism

"Victory will come, but it will take time and require the kind of focused and sustained national commitment that we saw during the Cold War. Most importantly, it will require a relentless global campaign, joined by those in the Muslim world who are repulsed by al-Qa'ida's savagery, to expose the terrorists for what they are: peddlers of a hopeless, negative, backward vision of the world...."— D/CIA Michael V. Hayden, speaking at the
Duquesne University Commencement Ceremony
May 4, 2007

Unlike America, where we label them "Islamofascists" and create logos with scimitars for bayonets on the barrel of an AK-47. Al Qaeda doesn't stand a chance. In the battle of the logos, we clearly win!

(Al Qaeda in Sweden. Best I could do.)