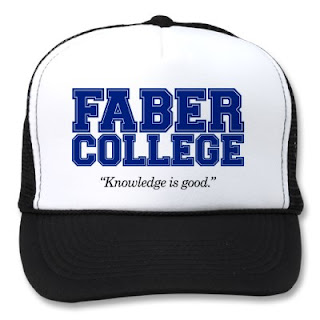 Four in 10 Catholics misunderstood the meaning of their church's central ritual, incorrectly saying that the bread and wine used in Holy Communion are intended to merely symbolize the body and blood of Christ, not actually become them.

I really like this formulation, from the NYT article on the study:

Clergy members who are concerned that their congregants know little about the essentials of their own faith will no doubt be appalled by some of these findings:

¶ Fifty-three percent of Protestants could not identify Martin Luther as the man who started the Protestant Reformation.

¶ Forty-five percent of Catholics did not know that their church teaches that the consecrated bread and wine in holy communion are not merely symbols, but actually become the body and blood of Christ.

¶ Forty-three percent of Jews did not know that Maimonides, one of the foremost rabbinical authorities and philosophers, was Jewish.

First, I suppose we can divide clergy into those who are concerned about their congregants knowledge about their churches doctrines (not "faith," that's a different concept altogether), and those who simply don't care how ignorant their congregants are. Well, come to think of it, maybe we can; but pursuing that line would be churlish. However, I'd say most clergy wouldn't be appalled by those numbers; rather, they'd say "I told you so."

I don't know the history of religious education in other faiths, and my knowledge of it in Protestantism is rather sketchy, but anyone reading this who is also familiar with the term "Sunday school" probably presumes the church always had an active hand in teaching the doctrines of the church. No, actually.

"Sunday school" is a concept and institution that is just over 200 years old, which means it came along some 300 years after the Protestant Reformation. And it didn't begin as a church school to indoctrinate the children of the faithful. Such an idea would have been anathema. Protestant families considered religious instruction to be a family matter, and would have deeply resented any attempt to intrude on that duty by any institution, including the Church. Sunday school, in fact, was started by a Presbyterian pastor in Scotland, who was appalled that the poor children of his parish worked 6 days a week and received no education at all. On their one day off, he decided to teach them to read and write, and thus "Sunday school" was born. Only later did it become the Sunday morning baby-sitter and/or educational center of the Protestant churches.

Today, even Sunday school has withered away, under an onslaught of parents as teachers who themselves don't know basic church doctrines or religious tenets, and the pressure of a work week that spills over into ever day of the week. It may not be work to attend a child's soccer game, but somebody is working that game (the coaches, the referees, etc.), and athletic events of all stripes claim all the time not set aside from school activities. There is also just a general lack of interest in matters religious in the culture. At the turn of the 20th century, correspondence courses in koine Greek, the language of the New Testament, were a booming business. Who reads the New Testament at all, anymore, save for clergy and atheists? The churches I've been involved with have tried to catch the youth with "confirmation" classes, cramming into a year or (more commonly) less all the instruction they didn't receive in the years before. It's a bit like trying to give an uneducated 18 year old a college education; there's almost nothing there to build on, and the kids, predictably, aren't really interested in the doctrine of transubstantiation or the distinction between the Lutheran and Reformed doctrines on the elements of communion.

Of course, that assumes anyone ever really was. I question surveys like this, even as I point to them to confirm my worst suspicions. Does it really matter to anyone that we know today that Maimonides was Jewish? It's useful to scholars and to certain arguments and discussions, but as a matter of general knowledge? How important to one's faith is it to know who Martin Luther was, and what he did? Atheists trumpet such ignorance as proof of their superiority:

“I have heard many times that atheists know more about religion than religious people,” Mr. Silverman said. “Atheism is an effect of that knowledge, not a lack of knowledge. I gave a Bible to my daughter. That’s how you make atheists.”*

Atheism is an affect of knowledge, I will agree with that. But it is not an affect of superior knowledge, better knowledge, or "truer" knowledge. I know who Maimonides was (and what he wrote), I know who Martin Luther was (and what he wrote, especially about the Jews and laborers; it's not pretty), and yet this knowledge does not make me superior to religious people I have known, some of them family members. Indeed, I think in their faith and lives, they were far superior to me. I can also say that about a former neighbor of mine, who was a committed atheist. In his life and actions, his charity and generosity and kindness, he was a far better Christian than I've ever been.

What does it matter if I know the tenets of Calvin's Institutes? Am I less a believer if i don't know Zwingli gave Protestant worship the "pastoral prayer"? The issue of the status of the eucharistic elements divided Lutheran and Reformed tradition churches for nearly 500 years. It was only resolved in the 19th century in Prussia by the forced "marriage" of the two churches into the Evangelical church (later the German Evangelical Church in America). The rift was formally healed between the two Protestant traditions just a few years ago. In either case, did anybody really notice? Did anybody, aside from clergy, really care?

These things have always mattered to clergy, but we can't forget that, especially prior to the Protestant Reformation (which rested on rising literacy rates in Europe), the clergy were the literate members of society. They kept the records and formulated the arguments. It was important because they said so, and because they passed on their ideas and arguments in writing to later generations. Was the layperson in the cathedral at Koln or in Calvin's Geneva really that concerned with what the elements were when taken in the worship service? Probably not. Certainly not the way the priests were.

There is certainly knowledge worth saving, worth preserving and passing on. For the people of the Book (Jews, Muslims, Christians), that knowledge starts with scripture. But the rest is tradition, and, as the German E&R church once prayed:

Even the archaic English of that prayer, echoing the King James translation in words ("thy Church") and syntax is a tradition from which we have ultimately to be delivered. Certainly we can argue about the importance, even the validity, of the doctrine of transubstantiation, but more and more we are arguing among a shrinking circle, sounding more and more like the medieval scholastics caricatured by the Renaissance as arguing over how many angels could dance on the head of a pin. This is simply an argument that has no life for the congregants, and insists on a metaphysics, a usage, which has lost its spirit. If it is of no matter to those in the pews, perhaps it has become an institution which no longer gives life and power to this generation.

What does, then? Joel Osteen, among others, insists the words of the Bible mean God wants you to be rich and happy always. Fundamentalists and evangelicals insist the Bible means you must accept Jesus Christ as your Lord and Savior, or suffer the torments of the damned for all eternity. I preach the gospel as a teaching of the Risen Lord who taught us and gave us the power to care for each other, to become more like my atheist neighbor, a person too few of us can become on our own. Which of us teaches the essential information of Christianity? And what does it matter, in those teachings, what the elements of the Eucharist mean? How is my message affected by my audiences knowledge of who Mother Teresa was? Or Maimonides? Or the leader of the Exodus from Egypt?

How does any of the knowledge tested in that study help in answering the question: "What good does it do a person to acquire the whole world and lose...oneself?" At some point, in this context, that becomes the question of the story of Faustus. After all, the Bible tells us that when God appeared to Elijah there was a whirlwind and an earthquake and a fire, but God was not in any one of them. Is God in the doctrines of the Church, or the knowledge of the believer?

The title for this post is taken from the inscription on the statue of the founder of Faber College in Animal House. (I couldn't find that image; I had to make do with the gimme cap). Knowledge certainly is good, but good for what? Good for whom? I've no wish to preach to a congregation ignorant of the most basic ideas of Christianity (I'm no missionary, although perhaps I should reconcile myself to being one, in my own backyard), but neither do I need them to be current on a 500 year old controversy that only ever mattered to the professional clergy and theologians. Knowledge is good, but we have to use it for something, we have to have a use for it in people's lives, or it isn't much good at all.


*actually, I suspect what you make is a confused child. Unless you subscribe to a fundamentalist view that the Bible is magical text which explains itself to each and every person who reads it, you need a community to interpret and explain the meaning of the stories in those books. For much the same reason we teach literature in school, and do it for at least 14 years; longer, if you major in the subject.