The poor will always be with you.... 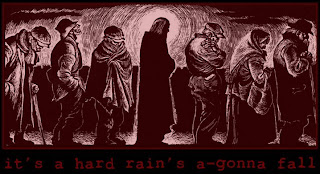 This story on NPR this morning:

Take a trip to one of those 24-hour Walmarts on the last day of every month, and you'll get a glimpse into the lives of low-income families trying to get by. At one location in Fredericksburg, Va., at around 11 p.m., families start to load up on necessities like diapers and groceries.

People like Tracy and Martin Young live nearby, and for the pair in their early 30s, it's a chance to shop quietly without their five children, two of whom are teenagers. Each is pushing a shopping cart overflowing with food. There's mac and cheese, bags of cereal and cans of evaporated milk. Most of this has to last for the whole month.

That's why they're here at midnight: It's when their food stamps and government checks for their 3-year-old daughter kick in on the first of every month.

That story was preceded by a discussion with Michelle Singletary , who lamented the poverty rate in America, but who also allowed that the recession was a corrective for people who'd been living beyond their means.

But, you know, in some ways, in just a tiny bit of me, I think it was a good thing. Because we were in a position that we shouldn't have been. There were far too many people living above their means, and I think this was the wake-up call that we needed. Unfortunately, it was a pretty, you know, when you're in a good sleep and someone sort of slaps you awake and you get jolted, it's not a good way to wake up. But I'm hoping and praying that when this is over -because it will end - that we learn from what happened, that we take these lessons and do better with our finances, both personally, corporately, and our government.

No sense of irony in what "living beyond their means" can mean, was displayed.
Posted by Rmj at 10:51 AM