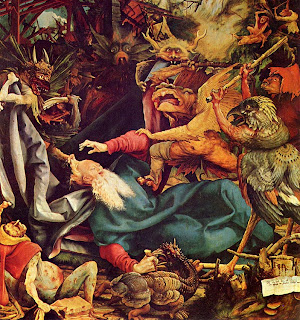 We are beset by demons. We are in a period when the demonic has sway, has risen to power, is trying its best to take control.

No, I don't mean that metaphorically, or "mythologically," or in any but a concrete way. And yes, I do mean "demons."

When governors stand forcefully for the destruction of what has taken decades to establish; when public officials declare the nation, the government, the people, are "broke" and nothing can fix anything except to stop everything; when the culture of scarcity is the only culture possible, when fear is a rational response to the present and despair the only hope that will save us, there is no other explanation than the demonic. When rulers destroy their own people for their own ends, there is no other explanation than the demonic. We are not ruled by dictators with secret police and mercenary armies, but we are now in the hands of governors and Congresspersons who tell us our only hope is in not having hope, our only salvation is in selfishness, our only chance is to protect what is ours at all costs and allow nothing to go to anyone else. What other term for that is there than demonic?

Governors, especially governors, behave as if they were Byronic heroes bravely defying fate. The Byronic hero is an individual responsible only to himself, who accepts the judgment of the cosmos and defies it with his individuality even as he is crushed in his singleness of purpose. Governors are not individuals responsible only to themselves. When they refuse to listen to the pleas, the cries, the demands of the very people they represent, they are not heroes: they are demons. They are bent on destruction: of labor unions, of hope for their communities, even of art. They are not defying an arbitrary universe indifferent to the human soul; they are destroyers. Demons do not edify, establish, or illuminate; they bring only darkness and destruction. What else can we call these people who would set whole states back by decades, who do so in the name of an ideology (a false god) or a conviction (a false identity) or simple because their masters wish it (a false allegiance), except demons?

We should understand that "demonic" does not mean "inhuman." Human beings are perfectly capable of demonic activity. We don't have to understand "demonic" as supernatural puppet masters. Demonic can be simply the urge for destruction, the desire to assert your will over others, in blind opposition to facts, reality, their wishes, what have you. Demonic is destructive. It is willful in the worst sense of that word; imposing its will without care or consideration of the consequences, seeking only to have it done and then stand among the ruins, happy that it has prevailed.

So Scott Walker crows that he has eliminated collective bargaining among public unions, even as his law is challenged in state court. Rick Perry declares he is not responsible for Texas independent school districts laying off teachers, even as the State over the decades has piled more and more requirements on those school districts, and refused to give them money to hire people to meet those requirements. Rick Scott in Florida boldly refuses Federal money to help Florida improves it's public transportation, a move that will only hurt the people of Florida. Public education is being especially targeted, and not just in Texas. If it isn't education, it is public art and who rooms are named after. Which is almost more absurd than it is demonic, if it weren't so reflective of the prevailing attitude of destruction. All to which the demons stand opposed, or which is perceived as opposition, must be destroyed. 12,000 protesters showed up at the Texas State Capitol to object to cuts in education funding, but the GOP majority in the Legislature insists they are not responsible when teachers get laid off, even as those same legislators refuse to allow school districts to raise taxes in order to make up the shortfall their tax policies have created, and which they insist they must protect at (literally) all costs.

Watch this Jon Stewart clip, and overlook the humor in favor of what the candidates said, and what they are now doing:

Even the avuncular Stewart has trouble not declaring these governors destructive rather than misguided, deliberate rather than merely incompetent. This is beyond ideology; it is well into fantasy. These political leaders do not imagine themselves the vanguards of a new and purer way of thinking. They imagine themselves the only authority on earth, their power the only power that is needed. What is that if not beyond delusional, and simply demonic?

How, then, should we live? I honestly think naming this for what it is, is important. Dangerous, of course, if we try to make this a public meme, as one would be literally guilty of demonizing one's opponent. But the understanding must be clear; there should be no equivocating about it. What is being done in the name of governance is evil. In Wisconsin the governor is dismantling the public school system. In Texas, the cuts will be "catastrophic," and yet the Governor and the GOP leaders continue to blame school administrators for the problem. The cuts, of course, will savage the state economy. (The job losses in Texas are predicted at up to 190,000.)* But that's okay with the Governor, because he's keeping his promise to cut taxes and state spending. The effect will be good because he insists it will be. Which is pretty much the attitude of every governor mentioned in Jon Stewart's clip, above. To put it in stark terms:

"Help me understand ... that we're going to spend millions of dollars on tourism and movie production, but we're going to be cutting back Medicaid, letting teachers go?" Sen. John Whitmire, D-Houston, asked [Milton] Rister [Gov. Perry's director of administration] when he asked for the money. "Help me understand how you sit there and ask for those kinds of feel-good programs that might create some jobs, but at the same time we're letting medical students go, residential residents go, state employees, help me?"

If Perry's approach cannot be described as demonic, what can?

*UPDATE: A newer study nearly doubles that amount to 335,000 jobs (state and private) lost due to the budget pending in the Texas House. And yet: