"The first thing we do, let's kill all the lawyers." 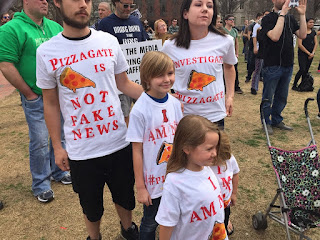 Because, you know, government doesn't work:

Conspiracy theorist Alex Jones has apologized for his website’s role in spreading a fake news story that inspired an armed man to storm a pizzeria in search of abused children in December.

Jones, who operates the website Infowars, had suggested that Comet Ping Pong in Washington, D.C., was hiding child sex slaves in its basement as part of a pedophilia ring supported by top Democratic politicians.
....
In a statement posted to his website and read Friday in a video broadcast, Jones blamed other outlets and social media sites for the “not appropriate” level of attention given to the restaurant and its owner, James Alefantis.

“Neither Mr. Alefantis, nor his restaurant Comet Ping Pong, were involved in any human trafficking as was part of the theories about Pizzagate that were being written about in many media outlets and which we commented upon,” he said.

Did Jones see the light?  Did the scales fall from his eyes and reveal he trafficked in lies and deceit and nonsense?  Did the invisible hand of the market slap some sense into him?  No, not really:

Jones said Alefantis wrote to him in February, demanding an apology and retraction of his broadcasts and postings on Pizzagate. Texas law dictates that Jones, who is based in Austin, had exactly one month to respond to Alefantis’ letter to avoid facing punitive damages in a libel suit. That deadline was Friday, the Post reported.


Friday just happens to be the day Jones posted his apology to his website.   Damned lawyers!  Damned tort law!