As I understand it, from the ads for the movie, the "explosive secret" of The Da Vinci Code is that Jesus was actually married to Mary Magdalene, and they had children. On this hangs all the subterfuge, suspense, and plot twists, of the novel.

It's hardly a new idea, to begin with. The idea that Jesus married and had children was the basis of Kazantzaki's The Last Temptation of Christ (a great book, by the way). It has been kicked around before, more than once in books that promised to reveal this "explosive" secret and "change the world." And I suspect it is a story that goes back to the 1st century.

Considering such much more interesting historical documents like Secret Mark (known only from a letter of Clement) or the Infancy Gospel of James (which made its way into a Christmas carol on a Kingston Trio album!) actually exist, whence comes this idea that some "secret" will end Western civilization as we know it? And especially that this secret would do it?

In truth, of course, the "secret" is about as explosive as the "secret" that Christmas was once a pagan holiday. If for no other reason, now that the "secret" is out (even among those of us who will never read the novel) and the world has continued turning and the Church continues to exist:

How is it we imagine that in a fictional world, this would be such restricted knowledge that suspense and intrigue and murder and mayhem would naturally follow? I mean, at least in James Bond world, we would be upset in the real world, too, if bad guys got hold of a nuclear bomb.

Are we really that stupid about matters religious? In the real world they mean less than nothing to us (we shrug and say "Eh!"), but in the fictional world, they drive deadly conspiracies for centuries?

And, of course, I no sooner post that, than I open a box at the bookstore, and find this: 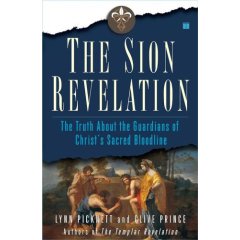 Apparently Jesus of Nazareth had both a sacred bloodline, and a secret society to protect that secret.