Goin' back to Houston

I-45 starts in Galveston and heads north through Houston. I-10 cuts across from Florida, and continues through town toward California.

I-45 and I-10 are known locally as the roads you don't want to be on, because of the heavy local traffic. Slowdowns and crawling parking lots start early in the day, and linger for hours. Both highways are under construction now, which means traffic chokes down to fewer lanes, and some of the access roads are simply lost causes where you might as well plan to spend the night.

And hurricane season is coming back around soon.

The traffic jam that snarled Houston last year as Hurricane Rita seemed to be barreling down on us was not caused solely by Houston residents. It was caused by residents from Lousiana to Galveston to Corpus Christi, trying to flee the coast. Houston residents joined in, and the traffic jam became the stuff of legend: a line of cars literally unable to move, from Houston almost to Dallas, some 250 miles away. Could it happen again? Why ever not? The Texas Legislature has not met since Hurricanes Rita or Katrina; the Governor has not so much as announced a commission to review what happened in Houston last September, much less to plan how to avoid it again. Controlling traffic on two fo the main arteries through the city would require more law enforcement personnel than Houston and Harris County could muster, working 24 hours a day for weeks, not days, before the next hurricane. It's fair to say, especially with the recent reminder of how devastated New Orleans is (and never doubt many people on the Texas coast are well aware of how bad off Mississippi and Gulf Coast Louisiana are) that personal evacuation plans now anticipate weeks, not days or hours, before the next storm, for an area due west of New Orleans to almost just north of Corpus Christi. How would Harris County handle that kind of traffic flow?

As poorly as they did the last time.

Houston residents died last September because of the flight from the coast, not because of Hurricane Rita. Lake Charles, Louisiana, to the east of Houston on I-10, is recovering almost as slowly as New Orleans. Few residents there are going to sit out the next threatened storm. Residents of Beaumont-Port Arthur are no better off, and are likely to head this way. And Galveston is more aware than ever that it is a barrier island. Memories of 1900 have not totally vanished down there.

But the bad memories of Rita seem to be gone already, at least for those in government down here. If asked, they would assure us that we can remain calm, that all is well.

This is government a la Grover Norquist. Texas has been the great laboratory for this experiment in short-sighted and pug ignorant politics. Now this picture of New Orleans is the image that is burned into everyone's brains. It should be connected with these words, and both should be connected with the GOP (and to some extent, the spineless Democrats) from dog-catcher to President: 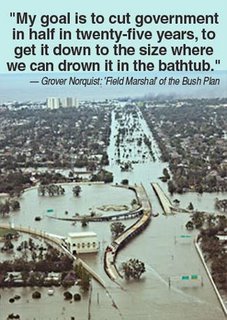