"I want to live forever! Light up the sky with my name!" 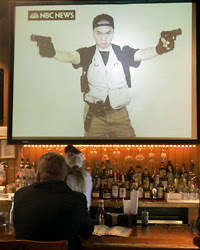 is what Harry Shearer is talking about:

A society in which it's easier to become famous for killing people than for doing something useful or constructive is one remarkable place in which to live.

A hermit was asked why we are troubled by demons and he answered, 'Because we throw away our armour, that is, humility, poverty, patience and men's scorn.'

Adding: this photo was taken in a bar in Blacksburg, VA. And blogs aren't the only ones who engage in cat-fights:

The videos of Seung-hui Cho, the man who fatally shot 32 people at Virginia Tech on Monday and then killed himself, shouldn't have been released because they don't offer the public any greater understanding of the gruesome crime, said Michael Welner, a forensic psychiatrist and ABC News consultant, on "Good Morning America" today.