What if they gave a War on Christmas and nobody came? 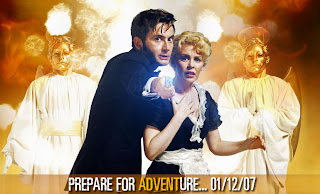 Best I can figure, that's what happened. I googled "War on Christmas" hoping to find some news about it; all I got were references from 2005. Of course, this could simply mean that "war on Christmas" is what the enemies of concerned citizens like Bill O'Reilly and John Gibson named the "battle," much like the mockery of "Political Correctness" (a term invented by conservatives to mock liberals, though no one seems to remember that, now).

So I don't know where it's going this year. Which is fine, of course; the last thing we need is another fight over whether Christmas trees are religious or secular symbols. O'Reilly is trying to stir the ashes by complaining about a city council effort in Colordao, but it's pretty weak tea, indeed. What is it about Colorado and Christmas decorations? But I wanted to point out, as the season approaches (or is already upon us, on the secular calendar. December and "Christmas" have become synonymous terms) that there's always been a "war on Christmas", and the real fight has never been over "paganism" v. Christianity, but a completely internecine battle. It's always been a fight, in America at least, between Protestants and Catholics. Not much of a fight, mind, as Catholics never had the political or social power they had in Europe; but the efforts to suppress or control or complain about Christmas, largely stem from our Puritan heritage. It was never secularists who hated "Christmas." It was conservatives, especially those who objected to the rowdiness of the celebrations. Of course, it was consumerism which tamed all of that, giving the wealthy an excuse to be generous and beneficent...with their "nuclear" family.

Which is what Christmas is really all about: family. Right, Charlie Brown? (By the way, where is the family in "A Charlie Brown Christmas"?) Good thing that show was never controversial, huh? I mean, it's a Christmas classic. I'm sure if CBS didn't air it, they'd hear from Bill O'Reilly....