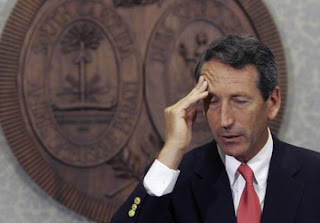 I understand that: humility is hard. And it looks nothing like this:

So in the aftermath of this failure I want to not only apologize, but to commit to growing personally and spiritually. Immediately after all this unfolded last week I had thought I would resign - as I believe in the military model of leadership and when trust of any form is broken one lays down the sword. A long list of close friends have suggested otherwise - that for God to really work in my life I shouldn’t be getting off so lightly. While it would be personally easier to exit stage left, their point has been that my larger sin was the sin of pride. They contended that in many instances I may well have held the right position on limited government, spending or taxes - but that if my spirit wasn't right in the presentation of those ideas to people in the General Assembly, or elsewhere, I could elicit the response that I had at many times indeed gotten from other state leaders.

Their belief was that if I walked in with a real spirit of humility then this last legislative term could well be our most productive one - and that outside this term, I would ultimately be a better person and of more service in whatever doors God opened next in life if I stuck around to learn lessons rather than running and hiding down at the farm.

Thomas More this guy ain't. Worse than that, he doesn't even understand why he's not approaching sainthood with such a public display of sacrifice. A sacrifice that isn't a sacrifice at all, of course, because what he's offering on the public altar is his wife, his children, his marriage, any possible sense of shame or culpability, everything except his ego, his libido, or his pride.

I suppose this is what comes from having a spiritual adviser who makes his living as a court reporter and whose spiritual advice seems to consist of telling you God wants you to do whatever it is you're doing. Funny thing is, Jesus spoke directly to the question of adultery once, in very clear language:

As you know, we once were told, 'You are not to commit adultery.' But I tell you: Those who leer at a woman and desire her have already committed adultery with her in their hearts." (Matthew 5:27-28, SV)

I suppose you could read that as: "So go ahead and get her in bed!," but I don't think that's what Jesus meant.

What he meant, of course, is that it isn't all about you, and that your actions begin in your thoughts. That's a very constrictive view of responsibility, but then humility restricts what we can do, too. And Governor Sanford is having none of it:

They have also made the point that a good part of life is about scripts - that the idea of redemption isn't something that Marshall, Landon, Bolton and Blake should just read about, it's something they should see. Accordingly, they suggested that there was a very different life script that would be lived and learned by our boys, and thousands like them, if this story simply ended with scandal and then the end of office - versus a fall from grace and then renewal and rebuilding and growth in its aftermath.

Yeah, this is all about teaching his kids. Sure it is.

What's really astounding here is to listen to this man preach on the sin of pride while displaying such conviction as to his own self-importance. He wasn't handed his head by the SC Legislature and Supreme Court (the former overrode 10 of his vetoes, the latter forced him to take the stimulus money he said he wouldn't take) because he was wrong; he was rebuffed because he wasn't in the right spirit to carry God's message to a government that desperately needed King David to save it from the grip of evil, a grip he knows because Cubby Culbertson told him it wasn't Mark's fault he had to go to Argentina or New York or outside South Carolina to sleep with his mistress. So now he has to bring his hard-earned humility to South Carolina, as a purified vessel of God's will. It takes a humble man to realize how important he is, and how important it is to God that he stay and do what God wants, because it just happens to be what Mark Sanford wants! And that's the lesson he wants to pass on to his children: God wants what Mark Sanford wants.

And that's what real humility is all about. Recognizing that you and God are totally sympatico.

That's how they say it in Argentina, right?