Where your treasure is 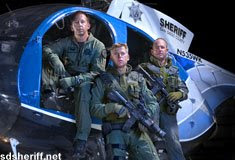 This is the photo provided by the San Diego Sheriff's office touting their helicopter. I can't honestly tell if these deputies are meant to be the three guys from "Ghostbusters," or the thin green line that stands between San Diego and anarchy. But the militarism of the image is a bit disturbing.

I've written before about this; about the creeping militarization of American society, about how we only have a civilization because we have a military, or militarized police. It's a Hobbseian view of government that would make Hobbes think twice. What's worse, of course, is that helicopter and 8 squad cars were used to subdue a Democratic fundraiser that was already breaking up when sheriff's deputies arrived and proceeded to pepper spray anyone within reach. What intrigues me about it, though, is this persistent idea that what we really have to fear are the people who will do us physical harm.

I live on the north side of I-10 in Houston. The south side, across from me, is some of the most expensive and exclusive real estate in the city (apart from River Oaks). There is a grocery store on the freeway, on the south side. The freeway access is important, not only to shoppers, but to any would be thieves in the parking lot looking for a snatch and grab on a purse, and a quick getaway. But because the store is on the south side, on the edge of the expensive real estate, it is considered "safe."

There is a new grocery store, near me, on the north side, equally accessible to the freeway, and much nicer than the store on the south side. Within a week of its opening, though, an e-mail made the rounds describing a frightening purse snatching incident, on top of which another victim (as the writer of the e-mail is describing her ordeal to another shopper in the parking lot) runs up to declare her car has been broken into, and the thieves escaped on...yes, the freeway. Shortly thereafter closed circuit TV cameras went up conspicuously in the parking lot (none in the lot on the south side of the freeway), and uniformed security officers stand at the doors, looking like police (and sometimes they are off-duty police) and riding around on a kind of Segway, to be sure the shoppers are safe. (Again, no such security measures deemed necessary at the south side store.) What's the difference between these stores? Location, location, location. On the north side of the freeway we are all poor, or dopers, drug runners, and cutthroats. At least according to those on the south side. Oh, and we're all shades of brown, too, since we can't afford the exclusive environs on the south side of the freeway. That part is true; we do have a lot of Asians, Hispanics, and Blacks on this side of the dividing line. Is it any wonder the freeway through this part of town was just widened to 26 lanes? It's a powerful symbol of demarcation.

Why am I telling you this?

Because police and the military are needed to keep us safe from those who would harm us. And yet, yesterday, Bernie Madoff was sentenced to 150 years in prison. Go to TPM and listen to what was said about him. He was very much a criminal, very much a danger to society. Bernie Madoff is white, Jewish, respected, and at no time presented a threat of violence to anyone. Yet he did more harm to more people than anyone in my neighborhood, or in the city of Houston, has ever done. Why didn't the police and the military protect us from him? Aren't the greatest threats to our way of life "those people" who dream only of taking what we have by force of arms? Surely the people we trust and willingly hand our property to are not as dangerous as the people we fear and constantly worry about protecting our property from.

And what was it Jesus said about this?

Yeah, but he didn't really mean that. After all, the biggest church buildings in Houston are all on the south side of the freeway; or downtown, or inside the Beltway, where the high-rent districts are. So he couldn't have been serious about that. Besides, the helicopter riding Ghostbusters will protect us from what scares us most.