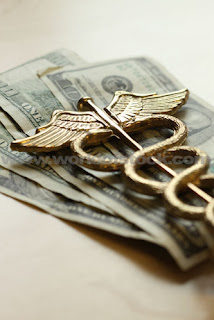 Goldhill says the problem is that health care costs are hidden from us. He says that over the course of your lifetime, you and your employer spend $1.7 million on your family's health care.

"Let's take all the money we're spending on insurance, give it to the patients and have the patients spend much of it directly," he says. "Let's have catastrophic insurance for the worst cases — the truly rare, major, unpredictable events. And the rest, let's rely on the consumer. The key is that the patient is actually getting the bill."

Goldhill's proposal is what many economists call a consumer-driven model. Individuals would be required to buy some sort of catastrophic plan. Only expenses over, say, $50,000 would be covered. That's a high deductible, but you would have $1.7 million over your lifetime that you currently do not see. That amount would be built up slowly in what is often called a health savings account.

And immediately I think of someone like "a wheelchair-bound woman with 'two incurable auto-immune diseases'".

How long would $1.7 million last for her? And what if she never gets the chance to build it up? She has to come up with $50,000.00 first? And additionally, another $1.7 million? And this is better than the current system how? How would this magic number build up slowly, if the disease takes you early, and persistently? Good-bye, Dr. Hawking? Sorry, but the irony is, your health care is too expensive?

Because, you know, some health problems are not "events," but simply: "life." Do we have no more sense of moral obligation, no more sense of communal responsibility, than did the crowd who booed this woman at a town-hall meeting? Is that what we want to be: a country, a people, a culture, a nation, concerned only with our money, and wholly unconcerned about our humanity? There is an obvious religious appeal I could make here, but do I really have to? Isn't it obvious, even to the most militant atheist, that Goldhill's concept is not only ethically bankrupt, but fiscally bizarre?