Biding the End: Advent as the "Little Lent" 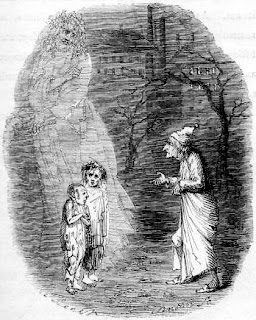 They were a boy and a girl. Yellow, meagre, ragged, scowling, wolfish; but prostrate, too, in their humility. Where graceful youth should have filled their features out, and touched them with its freshest tints, a stale and shrivelled hand, like that of age, had pinched, and twisted them, and pulled them into shreds. Where angels might have sat enthroned, devils lurked, and glared out menacing. No change, no degradation, no perversion of humanity, in any grade, through all the mysteries of wonderful creation, has monsters half so horrible and dread.

Scrooge started back, appalled. Having them shown to him in this way, he tried to say they were fine children, but the words choked themselves, rather than be parties to a lie of such enormous magnitude.

"Spirit! are they yours?" Scrooge could say no more.

"They are Man's," said the Spirit, looking down upon them. "And they cling to me, appealing from their fathers. This boy is Ignorance. This girl is Want. Beware them both, and all of their degree, but most of all beware this boy, for on his brow I see that written which is Doom, unless the writing be erased. Deny it!" cried the Spirit, stretching out its hand towards the city. "Slander those who tell it ye! Admit it for your factious purposes, and make it worse! And bide the end!"

I've noted, preparing a British Literature Survey course for December, how little poetry there is around the Christmas season in the period from Medieval England to the Restoration. Milton has a poem, Southwell "The Burning Babe," but Shakespeare's "Twelfth Night" is as secular a reference as the "A Christmas Story." There are few, if any, famous or notable poems around the season until after Dickens reinvents Christmas with the book this passage comes from. And while we Americans still revere a Dickensian Christmas we've never known, Christmas today is almost entirely an American creation, from the passion for gift giving to maintaining the fantasy of Santa Claus, to the mania that starts on the Friday after the fourth Thursday of November and only finally exhausts itself on the 25th of December.

And nowhere in any of the American literature related to Christmas, do I know of a passage similar to this one. Which says as much about us, as these two stories on NPR this morning. One, a woman who worked and invested all her life, and now faces bankruptcy due to medical bills; the other, a 19 year old who faces the prospect of no medical care at all, precisely because she is young. Dickens' allegory in the middle of Scrooge's conversion makes it clear that Ignorance and Want are the creations of humanity, not the universe or God, and that humankind alone is responsible for them. It is not the natural order that 19 year olds should be denied health care because they can't afford it, or that adult Americans should face poverty because they are too old to be insurable. But we have accepted it as "natural" in this country, and our politicians defend it as preserving some kind of status quo we are not disturb, lest we disturb the universe. This, too, is peculiarly American; as peculiarly American as Christmas and our annual anxiety over "what Christmas is really about."

We settle that question every year. It's about us; and getting; and selling; and buying; and giving, but only to those worthy of a gift or two, after we've made sure we have a few things for ourselves set aside. It's about withdrawing around a comfortable hearth with those who love us most gathered 'round, and all obligations shut out of doors for at least a day or two; or maybe we drop some coins in the bell ringer's bucket. Mostly it's about blaming people for their poverty or their need or their hard circumstances, because government is not the answer and charity is only for the deserving and my wants and needs have to come first, and Christmas after all is about giving, because the Christchild was a gift and the Wise Men brought him presents, and sure it's more blessed to give than to receive, but somebody's got to do the receiving, and who is more deserving than those worthy of the presents?

We invented Christmas in this country, a little over 150 years ago, in a little over 50 years of that span, and now we wrap ourselves securely in it, and forget or ignore or overlook the lessons of the man who would grow up from the child who is "The Reason for the Season." We wrap ourselves tightly in what we have created, and we call it good, even as we bemoan the materialism of it, even as we complain about "capitalism" and "greed" and sins we never commit (but others do!), problems we have nothing to do with (but others do!). And we take up an iron pen and etch that "Doom" even more indelibly into our own foreheads, convinced that we know neither Ignorance nor Want, and convinced that is a good thing, when in fact it is all we know, and is indeed what we are wrapping ourselves in.

And when we can't understand why Christmas is never like "it's supposed to be," we never think there is a very good reason for that, and that is has very little to do with what everybody else has done to Christmas. Or what little we have done for our world, for our brothers and sisters, for the ones bemoaned and wailed over by Jacob Marley, who at least regrets in death what he did not do in life. But Marley was British, and we are Americans; and there is no such moral lesson in our literature. 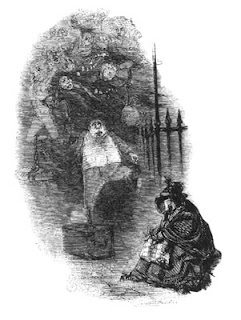