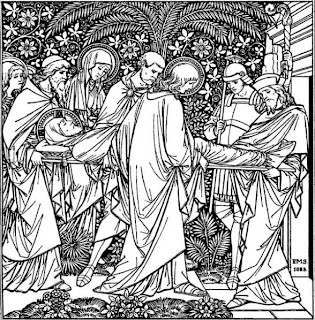 A repeat from a few years back. The words of G.K. Chesterton:

Our faith begins at the point where atheists suppose it must be at an end. Our faith begins with the bleakness and power which is one night of the cross, abandonment, temptation and doubt about everything that exists! Our faith must be born where it is abanoned by all tangible reality; it must be born of nothingness, taste this nothingness and be given it to taste in a way that no philosophy of nihilism can imagine.-- H. J. Iwand

That a good man may have his back to the wall is no more than we knew already; but that God could have his back to the wall is a boast for all insurgents for ever. Christianity is the only religion on earth that has felt that omnipotence made God incomplete. Christianity alone has felt that God, to be wholly God, must have been a rebel as well as a king. Alone of all creeds, Christianity has added courage to the virtues of the Creator. For the only courage worth calling courage must necessarily mean that the soul passes a breaking point - and does not break.

In this indeed I approach a matter more dark and awful than it is easy to discuss; and I apologize in advance if any of my phrases fall wrong or seem irreverent touching a matter which the greatest saints and thinkers have justly feared to approach. But in that terrific tale of the Passion there is a distinct emotional suggestion that the author of all things (in some unthinkable way) went not only through agony, but through doubt. It is written, "Thou shalt not tempt the Lord thy God." No; but the Lord thy God may tempt himself; and it seems as if this was what happened in Gethsemane.

In a garden Satan tempted man: and in a garden God tempted God. He passed in some superhuman manner through our human horror of pessimism. When the world shook and the sun was wiped out of heaven, it was not at the crucifixion, but at the cry from the cross: the cry which confessed that God was forsaken of God.

And now let the revolutionists of this age choose a creed from all the creeds and a god from all the gods of the world, carefully weighing all the gods of inevitable recurrence and of unalterable power. They will not find another god who has himself been in revolt. Nay (the matter grows too difficult for human speech), but let the atheists themselves choose a god. They will find only one divinity who ever uttered their isolation; only one religion in which God seemed for an instant to be an atheist.