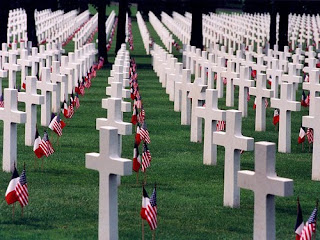 I first said this five years ago:

The stories about its origin are indeed varied. Perhaps it began as "Decoration Day." The stories I heard was that families would go out to the cemeteries to honor the dead from the Civil War. Graves would be decorated, picnics would be held. The dead and the living would both be honored. Where it originated, and how, is still subject to debate and conjecture. But this much seems clear: we used to be more mature about such things.

A child said, What is the grass? fetching it to me with full hands;
How could I answer the child?. . . .I do not know what it is any more than he.

I guess it must be the flag of my disposition, out of hopeful green stuff woven.

Or I guess it is the handkerchief of the Lord,
A scented gift and remembrancer designedly dropped,
Bearing the owner's name someway in the corners, that we
may see and remark, and say Whose?

Or I guess the grass is itself a child. . . .the produced babe of the vegetation.

Or I guess it is a uniform hieroglyphic,
And it means, Sprouting alike in broad zones and narrow zones,
Growing among black folks as among white,
Kanuck, Tuckahoe, Congressman, Cuff, I give them the same, I receive them the same.

And now it seems to me the beautiful uncut hair of graves.

Tenderly will I use you curling grass,
It may be you transpire from the breasts of young men,
It may be if I had known them I would have loved them;
It may be you are from old people and from women, and
from offspring taken soon out of their mother's laps,
And here you are the mother's laps.

This grass is very dark to be from the white heads of old mothers,
Darker than the colorless beards of old men,
Dark to come from under the faint red roofs of mouths.

O I perceive after all so many uttering tongues!
And I perceive they do not come from the roofs of mouths for nothing.

They are alive and well somewhere;
The smallest sprouts show there is really no death,
And if ever there was it led forward life, and does not wait at the end to arrest it,
And ceased the moment life appeared.

All goes onward and outward. . . .and nothing collapses,
And to die is different from what any one supposed, and luckier.--Walt Whitman

"The beautiful uncut hair of graves." We used to put our graves beside our churches, so we knew where our dead were. Now in our sanitary ways, and our sanity, we keep them as far from the beaten path as possible; along with our hospitals, our nursing homes, our "funeral homes." We don't want to be reminded of death, unless it is on TV, and involves the death of "bad people." Or just the unknown faceless ones, the bodies at the crime scenes that always get the stories going.

We used to recall that war had a high price, and yet we too easily forget how easily is it paid when all the bodies are out of sight. It wasn't long after the Civil War, after all, that we were engaged in the glorious adventure of liberating the Philippines. Apparently inspired by that venture, Mark Twain wrote his famous "War Prayer." But even so, we used to honor our dead soldiers.

Perhaps the Gettysburg Address is linked to Memorial Day, too. The eloquence of Lincoln is unimaginable in any living politician. But just try to imagine any of them even addressing the subject of death in this way:

Four score and seven years ago our fathers brought forth, upon this continent, a new nation, conceived in liberty, and dedicated to the proposition that "all men are created equal"

Now we are engaged in a great civil war, testing whether that nation, or any nation so conceived, and so dedicated, can long endure. We are met on a great battle field of that war. We have come to dedicate a portion of it, as a final resting place for those who died here, that the nation might live. This we may, in all propriety do. But, in a larger sense, we can not dedicate -- we can not consecrate -- we can not hallow, this ground -- The brave men, living and dead, who struggled here, have hallowed it, far above our poor power to add or detract. The world will little note, nor long remember what we say here; while it can never forget what they did here.

It is rather for us, the living, we here be dedicated to the great task remaining before us -- that, from these honored dead we take increased devotion to that cause for which they here, gave the last full measure of devotion -- that we here highly resolve these dead shall not have died in vain; that the nation, shall have a new birth of freedom, and that government of the people by the people for the people, shall not perish from the earth.

Lincoln praised those who died in a valiant struggle to preserve the union, to keep the nation from ending. "I wish I could translate the hints about the dead young men and women,/And the hints about old men and mothers, and the offspring taken soon out of their laps./ What do you think has become of the young and old men?/What do you think has become of the women and children?" I think: "A wise man who speaks his mind calmly is more to be heeded than a commander shouting orders among fools." I think: "Wisdom is better than weapons of war, and one mistake can undo many things done well." (Ecclesiastes 9:17-18, NEB)

I think it is time to praise famous women and men, and for believers to remember their Creator, and to honor the dead not for what they fought for, but because they, too, were God's children.

Let us now sing the praises of famous men,
all the heroes of our nation's history,
through whom the Lord established his renown,
and revealed his majesty in each succeeding age. Some held sway over kingdoms
and made themselves a name by their exploits.
Others were sage counsellors,
who spoke out with prophetic power.
Some led the people by their counsels
and by their knowledge of the nation's law;
out of their fund of wisdom they gave instruction.
Some were composers of music or writers of poetry.
Others were endowed with wealth and strength,
living peacefully in their homes.
All these won fame in their own generation
and were the pride of their times.
Some there are who have left a name behind them
to be commemorated in story.
There are others who are unremembered;
they are dead, and it is as though they had never existed,
as though they had never been born
or left children to succeed them.
Not so our forefathers; they were men of loyalty,
whose good deeds have never been forgotten.
Their prosperity is handed on to their descendants,
and their inheritance to future generations.
Thanks to them their children are within the covenants-
the whole race of their descendants.
Their line will endure for all time,
and their fame will never be blotted out.
Their bodies are buried in peace,
but their name lives for ever.
Nations will recount their wisdom,
and God's people will sing their praises.

To it I would only add that we are not free because men and women died. We are free because we choose to be. Their deaths secure nothing for us; we have freedom for ourselves. Their deaths were in war, and war is neither the source of our freedom, nor the reason to remember.. "Their bodies are buried in peace, but their names will live forever. Nations will recount their wisdom, and God's people will sing their praises." That is a fitting remembrance. We remember the dead; because they were family.