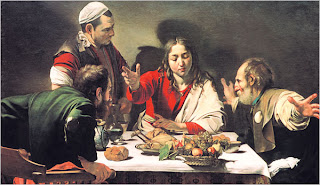 Follow this link, and read this post. Read it all the way through, although I'm already going to tell you, it ends here:

That may be true, but all bubbles do eventually burst, all Ponzi schemes do collapse for good at some point. The only question is when. For those of us not on the verge of retiring, the sooner we have this day of reckoning and get it over with, the better.

Not quite as stirring as "The arc of the universe is long, but it bends towards justice," but the same optimistic ideal. To which I want to say, without engaging in an argument with the late Dr. Martin Luther King, Jr.:

I don't mean to argue that the arc of the universe doesn't bend toward justice, but it does so to the extent we see that possibility, and work to make it so. I actually think the rant in that post is right, and that financial markets run the country and the world, and that the whole thing is a con game. NPR reported this morning that the "Bailout" for Greece by the European Union was substantially increased because the first offer wasn't large enough; the "market" expressed no confidence in it.

INSKEEP:.... And let's talk about Greece, which is at the heart of the matter for now. We mentioned a $145 billion rescue package. There's also austerity measures being called for in Greece. Is this going to be enough, Tom?

GJELTEN: The big question, Steve, is whether private investors will come to the conclusion that the European Union and the International Monetary Fund will spend whatever it takes to help Greece, because the only way that private investors will be reassured is if they have that feeling. We won't know that. We have to look at the reaction in the markets. Now, a couple of weeks ago when we saw the first iteration of this package was only about a third the size. What happened then was that private investors essentially voted it down. They said, This is not enough. We're not convinced.

Investors must be reassured. We have to wait and see the market reactions. It seems Germany has no choice but to do the market's bidding because, presumably, if Greece goes down, Germany will eventually totter on the edge of the abyss. Why? Because the markets say so.

Granted, this "market" is as vague and amorphous as the "Dow" or the "stock market," which were are always assured is "reacting" to some news of the day, even though such reported reactions are rank speculation on the level of divination based on the patterns discerned in chicken entrails. But the method doesn't matter, nor the results: it is the reporting alone that matters. It is the narrative alone anyone puts any "confidence" in. And even if you were to reveal that the US financial markets, or the world financial markets, were a confidence game: what would that change? If everyone believed you, how would they act differently? And is hoping for a reckoning and a collapse and an economic catastrophe on the order of the 1930's really an improvement, and an argument for honesty over hypocrisy?

"Everything in that rant at the link is true, and that's precisely the problem! But what other option do you have, except to live with it, except to accept it and pay no attention to the man behind the curtain and hope the machine continues to provide you with the comforts and security and black American Express Card even as you have no idea how it works or what is happening, and no one does: because it's all built on "confidence," it's all a Ponzi scheme, and it always was, and it always will be, and the dirty little secret is: the cavalry isn't coming. The Day of Reckoning is not at hand, and never will be. The final comeuppance for all those who deserve is not about to arrive; not now, not ever. That arc of the universe that bends towards justice is bent that way because people bend it, not because the physics of the universe require it. You are living in Omelas, and your only choice is to live there, or to walk away. And where would you walk to? Where would that wondrous and unimaginable place be?

"The basiliea tou theou. That's what it is. And that's where it is. Among you. Here. Now."

That's what Christianity should say. Because that's really the only other answer there is. Accept the price of Omelas; accept the terms of the con game. Or walk away. You can't bring it down, it will just rebuild itself. Omelas is impervious to your assaults on it. You helped make it; but you can't unmake it. Walk away. It's the only option you have.

Start walking. And find the better place only when you do so.