"But who is my neighbor?" 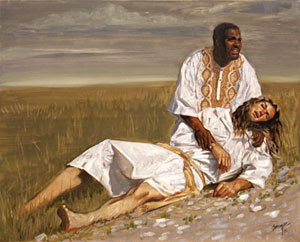 Speaking on Martin Luther King Jr. Day in the very church where Dr. King once pastored, new Alabama Gov. Robert Bentley gave a speech in which he said that those who have not accepted Jesus Christ as their savior are not his "brothers."

Bentley spoke at the Dexter Avenue King Memorial Baptist Church in Montgomery just minutes after taking the oath of office on Monday. The new governor, who has been a deacon at First Baptist Church in Tuscaloosa, first said that though he ran as a Republican, once he took office he "became the governor of all the people."

"I am color blind," Bentley said, according to The Birmingham News.

But Bentley then said that only those who are Christians and "saved" like he is are his brothers and sisters.

Not just "Christians," of course, but anyone who doesn't confess the theology Gov. Bentley confesses. So Catholics, Orthodox Christians, Copts, me...a lot of us are not his "brothers and sisters."

The really sad part is the effort to draw lines, to exclude people, to make clear who is acceptable and who isn't. Which, as I read the Gospels, is precisely what Jesus lived, and spoke, and acted, against doing.

"Which of these three, in your opinion, acted like a neighbor to the man who fell into the hands of the robbers?"

He said, "The one who showed him compassion."

Jesus said to him, "Then go and do the same yourself."