Torture Does Not Work 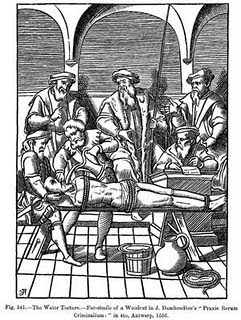 Josh Marshall, who should know better:

As a more general matter it's important to recognize that torture could easily have produced the key information. It just seems not to have in this case. You can be doctrinaire in opposing torture without being doctrinaire in assuming that it can't produce any good intelligence, which would be foolish.

This is the general assumption of people who've never made their living asking questions of people; or perhaps they imagine the journalistic practice of shouting questions at politicians is the equivalent of torture, that "grilling" a reluctant public figure is little different from waterboarding a captive.

First, let me remind everyone that the legal definition of torture makes no mention of interrogation. Torture is inflicting pain on someone; in the legal definition, doing so to a person under your custody or control, when you act under color of law. The connection between torture and confession is entirely specious.

Think about it: did the teacher who berated you, yelled at you, embarrassed you in class, elicit more information from you than the teacher you respected, and who respected you? Any lawyer who thinks his cross-examination will work best by intimidating the witness is a fool. Any interrogator who thinks information is best beaten out of a prisoner is a sadist, unfit to be in the same room with a prisoner. But don't take my word for it; consider the Congressional testimony of FBI agent Ali Soufani:

From my experience – and I speak as someone who has personally interrogated many terrorists and elicited important actionable intelligence– I strongly believe that it is a mistake to use what has become known as the "enhanced interrogation techniques," a position shared by many professional operatives, including the CIA officers who were present at the initial phases of the Abu Zubaydah interrogation.

These techniques, from an operational perspective, are ineffective, slow and unreliable, and as a result harmful to our efforts to defeat al Qaeda. (This is aside from the important additional considerations that they are un-American and harmful to our reputation and cause.)

And he has evidence (something JMM lacks) to back him up:

During his capture Abu Zubaydah had been injured. After seeing the extent of his injuries, the CIA medical team supporting us decided they were not equipped to treat him and we had to take him to a hospital or he would die. At the hospital, we continued our questioning as much as possible, while taking into account his medical condition and the need to know all information he might have on existing threats.

We were once again very successful and elicited information regarding the role of KSM as the mastermind of the 9/11 attacks, and lots of other information that remains classified. (It is important to remember that before this we had no idea of KSM's role in 9/11 or his importance in the al Qaeda leadership structure.) All this happened before the CTC team arrived.

A few days after we started questioning Abu Zubaydah, the CTC interrogation team finally arrived from DC with a contractor who was instructing them on how they should conduct the interrogations, and we were removed. Immediately, on the instructions of the contractor, harsh techniques were introduced, starting with nudity. (The harsher techniques mentioned in the memos were not introduced or even discussed at this point.)

The new techniques did not produce results as Abu Zubaydah shut down and stopped talking. At that time nudity and low-level sleep deprivation (between 24 and 48 hours) was being used. After a few days of getting no information, and after repeated inquiries from DC asking why all of sudden no information was being transmitted (when before there had been a steady stream), we again were given control of the interrogation.

We then returned to using the Informed Interrogation Approach. Within a few hours, Abu Zubaydah again started talking and gave us important actionable intelligence.

This included the details of Jose Padilla, the so-called "dirty bomber." To remind you of how important this information was viewed at the time, the then-Attorney General, John Ashcroft, held a press conference from Moscow to discuss the news. Other important actionable intelligence was also gained that remains classified.

After a few days, the contractor attempted to once again try his untested theory and he started to re-implementing the harsh techniques. He moved this time further along the force continuum, introducing loud noise and then temperature manipulation.

Throughout this time, my fellow FBI agent and I, along with a top CIA interrogator who was working with us, protested, but we were overruled. I should also note that another colleague, an operational psychologist for the CIA, had left the location because he objected to what was being done.

Again, however, the technique wasn't working and Abu Zubaydah wasn't revealing any information, so we were once again brought back in to interrogate him. We found it harder to reengage him this time, because of how the techniques had affected him, but eventually, we succeeded, and he re-engaged again.

Once again the contractor insisted on stepping up the notches of his experiment, and this time he requested the authorization to place Abu Zubaydah in a confinement box, as the next stage in the force continuum. While everything I saw to this point were nowhere near the severity later listed in the memos, the evolution of the contractor's theory, along with what I had seen till then, struck me as "borderline torture."

As the Department of Justice IG report released last year states, I protested to my superiors in the FBI and refused to be a part of what was happening. The Director of the FBI, Robert Mueller, a man I deeply respect, agreed passing the message that "we don't do that," and I was pulled out.

As you can see from this timeline, many of the claims made in the memos about the success of the enhanced techniques are inaccurate. For example, it is untrue to claim Abu Zubaydah wasn't cooperating before August 1, 2002. The truth is that we got actionable intelligence from him in the first hour of interrogating him.

To put it plainly and simply: torture works in the movies, and on TeeVee, because a writer can write it that way. In real life? Not so much.

Not at all, in fact. Torture works only to do what it is meant to do: inflict severe pain on another human being, who can't escape the pain, or the torturer. To correct Mr. Marshall, the only thing foolish on this topic is to assume torture does anything else.