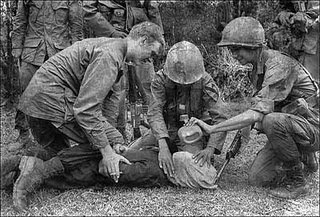 Judge Haywood: The trial conducted before this Tribunal began over eight months ago. The record of evidence is more than ten thousand pages long, and final arguments of counsel have been concluded.

Simple murders and atrocities do not constitute the gravamen of the charges in this indictment. Rather, the charge is that of conscious participation in a nationwide, government organized system of cruelty and injustice in violation of every moral and legal principle known to all civilized nations. The Tribunal has carefully studied the record and found therein abundant evidence to support beyond a reasonable doubt the charges against these defendants.

Heir Rolfe, in his very skillful defense, has asserted that there are others who must share the ultimate responsibility for what happened here in Germany. There is truth in this. The real complaining party at the bar in this courtroom is civilization. But the Tribunal does say that the men in the dock are responsible for their actions, men who sat in black robes in judgment on other men, men who took part in the enactment of laws and decrees, the purpose of which was the extermination of humans beings, men who in executive positions actively participated in the enforcement of these laws -- illegal even under German law. The principle of criminal law in every civilized society has this in common: Any person who sways another to commit murder, any person who furnishes the lethal weapon for the purpose of the crime, any person who is an accessory to the crime -- is guilty.

Heir Rolfe further asserts that the defendant, Janning, was an extraordinary jurist and acted in what he thought was the best interest of this country. There is truth in this also. Janning, to be sure, is a tragic figure. We believe he loathed the evil he did. But compassion for the present torture of his soul must not beget forgetfulness of the torture and the death of millions by the Government of which he was a part. Janning's record and his fate illuminate the most shattering truth that has emerged from this trial: If he and all of the other defendants had been degraded perverts, if all of the leaders of the Third Reich had been sadistic monsters and maniacs, then these events would have no more moral significance than an earthquake, or any other natural catastrophe. But this trial has shown that under a national crisis, ordinary -- even able and extraordinary -- men can delude themselves into the commission of crimes so vast and heinous that they beggar the imagination. No one who has sat at through trial can ever forget them: men sterilized because of political belief; a mockery made of friendship and faith; the murder of children. How easily it can happen.

There are those in our own country too who today speak of the "protection of country" -- of "survival." A decision must be made in the life of every nation at the very moment when the grasp of the enemy is at its throat. Then, it seems that the only way to survive is to use the means of the enemy, to rest survival upon what is expedient -- to look the other way.

Before the people of the world, let it now be noted that here, in our decision, this is what we stand for: justice, truth, and the value of a single human being.

And yes, isn't it interesting that we could conduct that trial without fear or terror, yet the trial of even one detainee at Guantanamo Bay is too grave a threat to our nation's survival. Tell me again what we stand for?