Streams in the Food Deserts 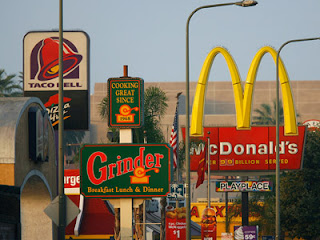 When Stephen Hawking lost his ability to talk he was given back his voice by another person. It is not our own dead bodies that raise us from the dead.--Mad Priest

Not the first way I'd intended to use the Mad Priest's words, but then I heard this on the radio, and had to look it up. It is perfectly appalling:

Look at that last sentence again, and think about it. Texas loves to tout the virtues of the free market. But obviously that market works only for people with enough money to live near a supermarket that sells fresh food. Of course, this is not "fresh" news, and the City of Houston is working to do something about it (which is why it was in the news again). As the report today noted: those of us who can drive to the supermarket think nothing of what food is available to us; but those of us who can't, end up eating fast food, which is not only more expensive, but less nutritious as well. But again, don't take my word for it:

The lack of access to affordable and nutritious food has a negative impact on the health of children and families in Houston and across Texas. Today, nearly two-thirds of Texans are overweight or obese. There is strong and consistent evidence that people who live in communities without a supermarket suffer from disproportionately high rates of obesity, diabetes and other diet-related health problems. In contrast, when people live in a community with a supermarket, they tend to eat more servings of fruits and vegetables and are more likely to maintain a healthy weight.

There are 16 food deserts in the City of Houston alone. To put that in some perspective, in the U.S. there is one supermarket for every 8600 people, on average. In Houston, there is one supermarket for ever 12000 people. Nor is the distribution equal: I live within easy driving (or even walking, even in Houston, where no one walks!) distance of 5 large grocery stores, all offering fresh foods and meats. But other people in Houston only live near fast food outlets and stores where they can get beer and milk, and everything else edible is largely processed and packaged for a very long shelf life. The very system that offers me so many choices and options, is also the system that denies people in 16 communities (and how large are those?) those very same options.

As the Mad Priest reminds us, no one lifts himself up by his own bootstraps. Our own bodies do not raise us from the dead. And food deserts are not natural creations, like swamps or bayous or wetlands (all of which Houston has in abundance); they are entirely human-made. We cannot expect the people living in them to change them. And we must rely on something besides blind faith in the market as a strong green god, sullen, untamed, intractable, and start realizing it is entirely of our own creation, and we alone are responsible for it, and for what it does to others. Indeed, we have to recognize that our system is set up to provide us with benefits from the suffering of others. And participating blindly in that system, at the very least, has got to come to an end.

"Come for water, all who are thirsty;
though you have no money, come, buy grain and eat;
come, buy wine and milk, not for money, not for a price.
Why spend your money for what is not food
your earnings on what fails to satisfy?
Listen to me and you will fare well,
you will enjoy the fat of the land. (Isaiah 55:1-2)

What would it be like to make that our purpose, our goal, our reality? Too utopian? Or not utopian enough?

"It is not our own dead bodies that raise us from the dead."