"Whole Sight; Or All the Rest is Desolation" 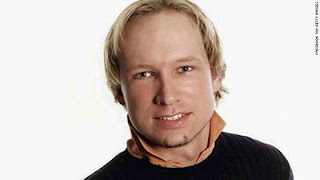 I was teaching rudimentary logic and logical fallacies to a Composition and Rhetoric class this morning. I realized there were several involved in the Norway bombing/shooting story, which I first heard about on BBC World Service the day of the event.

Several Americans with ties to Norway called "World Have Your Say" as the news was first being reported, to lament the crime as Norway's "9/11," and to decide for the Norwegians that they would have to increase their border security and airport security, because clearly this was the action of foreigners, probably Muslims (I don't think that was ever said explicitly, but the subtext was clearly that radicals from outside Norway had done this). There was even speculation reportedly coming out of Norway that this action was by foreign terrorists.

Of course, the man who says he did it is as Nordic as they come, and he did it because he hates Muslims and sees them as a threat to Norway and to Europe. Far from being Norway's "9/11" (the observation is not new with me), this was Norway's "Oklahoma City."

Right-wing pundits in this country were harsher and more belligerent than any of the callers I heard on BBC that day; and now they are clinging to their conclusions like barnacles on a ship. Which isn't much of a surprise, but it is surprising how quickly we jump to conclusions in the absence of any information; how readily we believe in the evilness of the "other," and how banal and homegrown such evil often is. Just after the Oklahoma City bombing, people were blaming foreigners and "Muslims" (a catch-all category for evil people). When it turned out to be Timothy McVeigh, suddenly it wasn't such a dynamic story anymore; and it didn't produce the introspection and examination of our right-wing violence that it should have. As Think Progress points out (in the link), the right wing pundits in this country who first decreed Muslims were responsible for the horrors in Norway, still insist we must remain vigilant against Muslims around the world.

That the suspect here is a blond Norwegian does not support the proposition that we can rest easy with regard to the panoply of threats we face or that homeland security, intelligence and traditional military can be pruned back. To the contrary, the world remains very dangerous because very bad people will do horrendous things. There are many more jihadists than blond Norwegians out to kill Americans, and we should keep our eye on the systemic and far more potent threats that stem from an ideological war with the West.

There are a number of logical fallacies in that paragraph, too, including the conclusion that even if Muslims didn't do it, they might as well have.

Still no recognition that it was the hatred of Muslims that drove Anders Brievik to act, and that he acted thinking an attack on the ruling Labour Party would make him the savior of Norway.

"The operation was not to kill as many people as possible but to give a strong signal that could not be misunderstood that as long as the Labor Party keeps driving its ideological lie and keeps deconstructing Norwegian culture and mass importing Muslims then they must assume responsibility for this treason," according to the English translation of Heger's ruling that was read out after the hearing.

Still not enough self-awareness, in other words, among the right wing pundits in this country that it is precisely their ideology that created a massacre in a peaceful country. And no, I'm really not exaggerating:

While [Frank] Gaffney’s [anti-Islam] views may seem absurd, he is incredibly influential. He regularly appears on Fox News, major conservative conferences, and his writing is referenced in the manifesto by the alleged Norwegian terrorist Anders Behring Breivik. Moreover, Gaffney was a pivotal figure in organizing the hysterical protests against a planned Muslim American community center in lower Manhattan.

When it emerged that these acts of terror were the work of a native Norwegian who thought he was striking a blow against jihadism and its enablers, it was immediately clear to me that his violence will deal a heavy blow to an urgent cause. [...]

In Norway, to speak negatively about any aspect of the Muslim faith has always been a touchy matter, inviting charges of “Islamophobia” and racism. It will, I fear, be a great deal more difficult to broach these issues now that this murderous madman has become the poster boy for the criticism of Islam.
....
Perhaps Brievik’s inexcusable act of vicious terror should serve not only as a warning that there may be more elements on the extreme Right willing to use violence to further their goals, but also as an opportunity to seriously reevaluate policies for immigrant integration in Norway and elsewhere. While there is absolutely no justification for the sort of heinous act perpetrated this weekend in Norway, discontent with multiculturalism’s failure must not be delegitimatized or mistakenly portrayed as an opinion held by only the most extremist elements of the Right.

The Big Idea must prevail, or all else is desolation. As I have said before:

Ideas don't matter. Things don't matter. People matter.
It is not too much to say that the supremacy of the Big Idea above all else is precisely what drove Breivik to act as he did:

He said his bombing of government buildings in Oslo and massacre at a summer camp for Labour's youth wing was aimed at deterring future recruitment to the party.

"The goal of the attack was to give a strong signal to the people," the judge quoted Breivik as saying.