To Abraham and to his descendants, forever 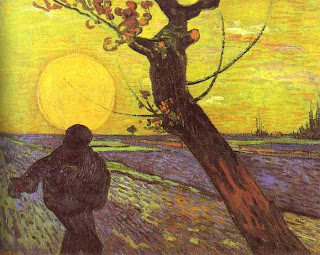 America is a "Christian nation," the right wing insists. Uh-huh:

Undocumented workers are fleeing [Alabama] to avoid the new anti-immigrant climate sure to be created by the new law. Under the legislation’s auspices, any individual that provides an illegal immigrant with a job, a place to stay, or even a ride can be prosecuted by the state.

Although the funding for the law has not yet been procured, the threat is still enough to send immigrant workers out of the state in droves. And unfortunately for the disaster-stricken residents of Tuscaloosa and the surrounding counties, “Hispanic workers, documented and undocumented, dominate anything to do with masonry, concrete, framing, roofing, and landscaping,” local contractor Bob McNelly said.

This looming disaster for the Alabama construction industry follows closely on the heels of a dire labor shortage in Georgia’s agricultural sector, which is attributed to the state’s strict new immigration law that takes effect today. Around 11,000 jobs have gone unfilled, even though the state’s unemployment rate is above the national average at 9.8 percent, and the Georgia Fruit and Vegetable Growers Association has estimated that around $300 million in profits have been left to rot in the fields.

Bryan Tolar, president of the Georgia Agribusiness Council, describes his state’s labor shortage as “unprecedented” and expresses amazement that Alabama would pass such a similar immigration law after seeing its economic consequences across the state line. “It was like, ‘Good Lord, you people can’t be helped. Have you all not been paying attention?’” Tolar said. “As we say in the South, bless their hearts.”

At a time in which states cannot afford to spend money on anti-immigrant enforcement and industries are struggling to get back on their feet, GOP lawmakers are continuing to ignore the real economic impact of pandering to their xenophobia.

There really isn't much room for xenophobia in the laws of Moses:

You shall not wrong or oppress a resident alien, for you were aliens in the land of Egypt. You shall not abuse any widow or orphan. If you do abuse them, when they cry out to me, I will surely heed their cry; my wrath will burn, and I will kill you with the sword, and your wives shall become widows and your children orphans. If you lend money to my people, to the poor among you, you shall not deal with them as a creditor; you shall not exact interest from them. If you take your neighbor's cloak in pawn, you shall restore it before the sun goes down; for it may be your neighbor's only clothing to use as cover; in what else shall that person sleep? And if your neighbor cries out to me, I will listen, for I am compassionate.

You shall not oppress a resident alien; you know the heart of an alien, for you were aliens in the land of Egypt. For six years you shall sow your land and gather in its yield; but the seventh year you shall let it rest and lie fallow, so that the poor of your people may eat; and what they leave the wild animals may eat. You shall do the same with your vineyard, and with your olive orchard. Six days you shall do your work, but on the seventh day you shall rest, so that your ox and your donkey may have relief, and your homeborn slave and the resident alien may be refreshed.

Please note that God doesn't get angry about who you sleep with; God gets angry about how societies treat the poor, and will make your families poor and defenseless, to right your injustice: "If you do abuse them, when they cry out to me, I will surely heed their cry; my wrath will burn, and I will kill you with the sword, and your wives shall become widows and your children orphans." It isn't that God is bloodthirsty; it is that God is righteous. And God's righteousness doesn't have much to do with what we would like to see happen. If there is a day of reckoning in the offing (and I'm not saying there is based on Mosaic law; that law applies to the children of Abraham, not to the nation state of America), it's not coming because states are validating same-sex marriages. It is coming because, as Dr. Martin Luther King, Jr. said: the moral arc of the universe is long, but it bends toward justice. Which would be very disturbing news to some of us, indeed: