It's Money That Matters 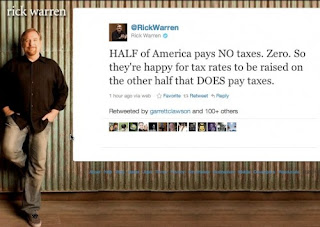 Yes, Rick Warren actually tweeted that. And begun the pile-on has: here, as well as here; here, and here, just to name four. Most of those are with either analyses of the statement (no, it is neither true nor correct) or with references to Scripture (probably someone somewhere has even reached to the "10 Commandments" to say something about bearing false witness, i.e., telling lies).

I would prefer only to point out that Warren retracted this tweet. Not, apparently, because he saw the light and realized the inhumanity and stupidity of what he said; but rather, because it embarrassed him. Perhaps he didn't like being reminded that people matter more than things and ideas; perhaps he realized he stood as exposed and malevolent as Ebenezer Scrooge declaring the poor should die and decrease the surplus population. I don't know that he realized the life his Lord and Savior led, or who he lived among on this earth, or he'd never had typed that tweet in the first place.

And I'd rather not respond with more scriptures. A), that's been done; B) it smacks of prooftexting; and C), I prefer the words of St. Basil and St. Ambrose, who more directly addresses Warren's particular sin:

17 centuries later, and it's a lesson we still struggle to learn.

UPDATE: Rick Warren has not only removed the tweet, but tweeted again to acknowledge "it did sound mean." Which is a lovely use of the passive voice and a masterful misdirection: Rick Warren didn't say the poor don't pay taxes and would love to see the rich taxed! The tweet did! And it was mean! Not wrong, ignorant, or cruel; not directly contradictory to the teachings of Jesus of Nazareth! No. It was just "mean." No, wait; let me be accurate. The tweet wasn't "mean." It "sounded mean."

Silly me, I didn't even know tweets had voices. I thought they were messages created by real people. Tweets are alive! Or at least, they are independent of their creators.

Well...that's okay, then. Mean ol' tweet. Good thing Rick Warren had no responsibility for it. He's not mean! He said so.