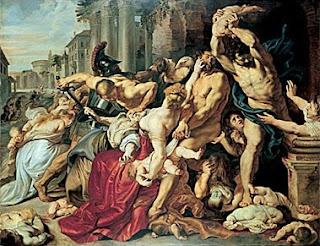 When Herod realized he had been duped by the astrologers, he was outraged. He then issued a death warrant for all the male children in Bethlehem and surrounding region two years old and younger. this corresponded to the time [of the star] that he had learned from the astrologers. With this event the prediction made by Jeremiah the prophet came true:
'In Ramah the sound of mourning
and bitter grieving was heard:
Rachel weeping for her children.
She refused to be consoled:
They were no more.' " (Matthew 2: 16-18, SV)

In lieu of a sermon or even a commentary, two stories. If the contemporary first one makes you think somewhat of the much older second one (especially the tradition of godparents to give poor children a chance in life), and then makes you reflect that the more things change, the more they remain the same...

well, it's because that tart observation is true.

Which applies as well to the story of the Christ child today as it did in Matthew's day. Or, as Robert Southwell put it:

As I in hoary winter's night stood shivering in the snow,
Surprised I was with sudden heat which made my heart to glow ;
And lifting up a fearful eye to view what fire was near,
A pretty babe all burning bright did in the air appear ;
Who, scorchëd with excessive heat, such floods of tears did shed
As though his floods should quench his flames which with his tears were fed.
Alas, quoth he, but newly born in fiery heats I fry,
Yet none approach to warm their hearts or feel my fire but I !
My faultless breast the furnace is, the fuel wounding thorns,
Love is the fire, and sighs the smoke, the ashes shame and scorns ;
The fuel justice layeth on, and mercy blows the coals,
The metal in this furnace wrought are men's defilëd souls,
For which, as now on fire I am to work them to their good,
So will I melt into a bath to wash them in my blood.
With this he vanished out of sight and swiftly shrunk away,
And straight I callëd unto mind that it was Christmas day.