Responsibility and its Discontents 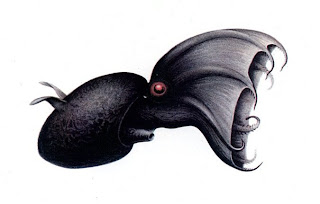 Why does these apologies make me think of squids disappearing in a cloud of ink?


Some of my comments in an interview with Ernie Istook on his Heritage Foundation radio show have been grossly taken out of context. Ernie is a good friend and former Congressman who asked for the interview long before the horror in Colorado. I had promised him a 10 minute interview and the topic scheduled for discussion was to be the economy and the President’s comments about it. When I learned of the tragedy I was heartbroken. Such devastation fills our hearts with sympathy making us want to hug our family and that should have been the extent of my comments. Prayers immediately went out for the victims and their families and their community.

Instead of the prearranged interview, Ernie asked me about the shooting in Colorado mentioning a Washington Post column that already brought up the issue of gun control, as well as, asking about my own personal experience as a judge with years on the bench. Tragedies immediately become personal, and I thought about our shooting in Tyler and what a hero Mark Wilson was along with another prior shooting in Texas. As a father, my heart goes out to those who lost loved ones in this heartless attack. The killings were a senseless, outrageous act. Our thoughts and prayers continue for all those so tragically affected, and I am very sorry if my comments caused heartache to anyone in Colorado.

I left the links in there so you can judge for yourselves how Rep. Gohmert's remarks were "taken out of context."  It's a nice dodge, especially just before slipping in the requisite passive voice apology:  "if my comments caused heartache to anyone in Colorado."  Or embarrassment to anyone in Texas; but that doesn't matter.   Nice work, too, separating himself from what he said, because, you know, words just come through us, they don't come from us.

Now is not the time to remind Rep. Gohmert, who was moved to quote Jesus into the Congressional Record over the shooting he mentions in his apology, that Jesus also said it's not what goes into you that matters, but what comes out of you.  I'm sure Jesus didn't mean words, though.  That would be harsh.

All the requisite elements, then, including the word "sorry" somewhere in the verbiage.  It's almost a standard text.

"There comes a time when explaining stops making sense and you are better off simply apologizing. So for those who were offended by my post regarding the shootings in Aurora, please accept my apologies. When I wrote it my heart was heavy and we were concerned about the fate of one particular young lady who we knew was at that theater that night. The points I tried to make were not presented well ... and have since been lost in the furor that resulted.

The most important thing, now as then, is that our thoughts and prayers remain with the victims, their families and all of those effected. There were great acts of courage in that theatre and our hearts have been moved to hear about them, like the stories of three young men who had taken their dates to the movies and ended up sacrificing their lives by shielding their girlfriends’ bodies with their own; what love, sacrifice and courage. My wish was simply for a miracle that might have saved lives in this horrific senseless attack.

I will never understand policies that disarm honest citizens and leave them vulnerable to the premeditated attacks of madmen, but it is still far too early for any sort of discussion over how to prevent the next such attack. When that time comes, we need to involve not just those involved in the debate over guns and public safety, but over mental health as well. We need to find out if there are better ways to be able to spot and help someone whose mental state is deteriorating as badly as this young man’s did.

For now, I remain very sorry for my remarks and any possible pain they may have caused."

Again, the careful distinction between the speaker and his words ("my remarks") and an even more careful refusal to take responsibility for them ("any possibly pain they may have caused").  Careful use of the passive voice is critical to the modern public apology.  He also rather neatly continues to blame the victims for not being armed (the same thing Gohmert originally did; maybe that was the part "taken out of context"?) without appearing to do so.  And, again, the cloud of ink:  "The most important thing, now as then, is that our thoughts and prayers," and so on, and so forth.  Why you lookin' at me?  Now is not the time.  And by the time it is the time, you'll have forgotten this, and my deleted Facebook posts will be history, and we can all forget I was an asshole in public, mkay?

A cloud of ink, and away!

I suppose we should be grateful Messrs. Pearce and Gohmert at least feel the need to apologize for their comments.  That's some kind of progress.