Of TULIPs and Timber 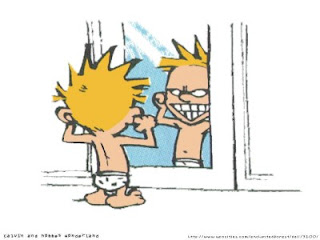 I've been mulling this over, trying to find a new way to say that ignorance is bliss and is also so widespread it makes me crazy.  Finding a way to say that, I mean, without making Crooked Timber my bete noir.

Maybe it's because I expect better of a website with so much obvious intelligence behind it, but arguments prompted by posts like this make me more than a little crazy.  First, Max Weber doesn't have have a Newcomb problem, he has a theological problem.  The "Calvinism" he identifies as the heart of the Protestant Work Ethic may well be a cultural legacy of the Reformed movement, but there is a tremendous chicken or egg problem involved there ab initio, to determine whether the culture of Jean Cauvin created the cultural impact of Reformed theology (which is most closely identified with Calvinism) or whether the culture of certain European countries (especially Switzerland, which took to Calvin's rule in Geneva like a duck takes to water) created "Calvinism."

It's been my experience that in cultural questions of which came first, the movement or the culture, bet on the culture, every time.

That might almost be, of course, a sociological approach to the question.  And I am not accusing Max Weber of NOT committing sociology.  What I am doing is accusing his would be users of his theory of not committing scholarship; or thought, for that matter.

Again, as is often the case at Crooked Timber, it is not the post that distresses me so much as the comments; but the entire discussion reflects the general, half-educated, half-pondered, half-baked assumptions about what 'religion' is, what it means, and what it reflects about human society.  Mostly, though, it's just a mindless mishmash in which "Calvinism" becomes an empty vessel filled with whatever garbage one might wish to dump into it.

Not that that isn't a sin many a "Calvinist" is already guilty of.  This, for example, will curl the hair of the most committed fundamentalist (well, it should, if it doesn't).  Dabney starts out denying the importance of Calvin's work, but ends up describing what would be most associated with it, the so-called TULIP (and on that Dabney is right; TULIP isn't really Calvinism, but for many people, it is. Therein the problem lies.).  I grew up rejecting this kind of theological reasoning, and considered myself a "liberal' for doing so, and yet until seminary I still considered myself, at my theological core, a Calvinist.  I now know enough to know I know very little about "Calvinism," except I'm quite sure it doesn't have as much to do with the Institutes as is commonly thought   In fairness, even Dabney doesn't commit Presbyterians to Calvinism, but there is a very real issue here:  who is to blame for "Calvinism."  There are the Institutes of Christian Religion, a book which is almost a classic, in that nobody has read it (but almost nobody praises it, either); and then there are various Reformed theologians, many of whom seem determined to either out-Calvin Calvin, or, like Dabney, to make Wodehouse's caricature's of Scottish Presbyterian elders come to vivid life.

So there is this complex issue of what "Calvinism" means anymore.  New Advent opens its entry by noting that, as a theological system, Calvinism is largely obsolete, and indeed it is.  What lives on is a withering caricature that persists largely as a scapegoat for whatever bothers us (much like the Puritans are blamed for whatever social difficulties we have, especially those we think are related to sex.  George C. Scott's character in Paddy Chayefsky's "Hospital" was right:  we're more obsessed with sex than the Victorians; who in turn were far more concerned with sex than the Puritans, in England or America.) . It's what lives on in popular sentiment that prompts me to rant and rave this morning.

What Calvinism has to do with the Protestant Work Ethic is an interesting problem, but it should be examined first as a chicken/egg problem.  Instead, it is typically accepted that idea creates movement just as cause creates effect.  The problem, of course, is that we never know cause then effect; we only know effect, and look back to associate a cause.  But before we do that with Calvinism, we need to identify Calvinism.  New Advent associates Calvinism with Reformed theology with Presbyterianism (the church of my childhood).  But Dabney begins by rejecting any necessary connection between Calvinism and Presbyterianism, largely because he's got a different definition of both from the popular usages.  Is he right, or wrong?  Well, Calvin is certainly the central figure in Protestant theology which doesn't derive from Luther and Melanchthon.  As New Advent points out, Calvin acted largely in reaction to Zwingli (as much as to the Roman church (Luther, an Augustinian monk until he was excommunicated, was always more interested in reforming Rome than in rejecting it)), pretty much squashed Zwingli out of existence.  His sole major contribution to Protestantism is the long pastoral prayer many non-liturgical Protestant churches (such as Presbyterians) are so enamored of.  But Calvin's victory came at a price, because while he wrote rules which meant to govern life both religious and secular, it isn't his rules which survived.  Indeed, his rules were largely discarded in favor the doctrine he came to represent.

Which is the irony of TULIP.   If you read Dabney carefully (well, the first few paragraphs are all you need), you see him rejecting the importance of Calvinism; but he also lays the groundwork for TULIP, and TULIP eventually becomes synonymous, in the popular as well as the Reformed theological mind, with Calvinism.  Is this entirely fair, or even Calvin's fault?  And is it really the reason for the PWE?  Probably not, because the roots of the PWE lie much earlier than Dabney in the 19th century.

One sweeping consequence of the Reformation is yet to be noticed. As it denied the merit of good works even in the regenerate, all those Catholic beliefs and ordinances which implied a Communion of Saints actively helping each other by prayer and self-sacrifice were flung aside. Thus Purgatory, Masses for the dead, invocation of the blessed in Heaven, and their intercession for us are scouted by Calvin as "Satan's devices." A single argument gets rid of them all: do they not make void the Cross of Christ our only Redeemer? (Instit., III, 5, 6). Beza declared that "prayer to the saints destroys the unity of God." The Dutch Calvinists affirmed of them, as the Epicureans of their deities, that they knew nothing about what passes on earth. Wherever the Reformers triumphed, a wholesale destruction of shrines and relics took place. Monasticism, being an ordered system of mortification on Catholic principles, offended all who thought such works needless or even dangerous — it fell, and great was the fall thereof, in Protestant Europe. The Calendar had been framed as a yearly ritual, commemorating Our Lord's life and sufferings, with saints' days filling it up. Calvin would tolerate the Swiss of Berne who desired to keep the Gospel festivals; but his Puritan followers left the year blank, observing only the Sabbath, in a spirit of Jewish legalism. After such a fashion the Church was divorced from the political order — the living Christian ceased to have any distinct relation with his departed friends; the saints became mere memories, or were suspected of Popery; the churches served as houses of preaching, where the pulpit had abolished the altar; and Christian art was a thing of the past.

That is a fair summation of the distinction between Roman Catholicism and Protestantism, and it indicates a cultural shift and acceptance which has precious little do with doctrine.  That "legalism" followed the Puritans to the New World, where they worked hard to suppress any celebration of Christmas (how'd that work out for them?).  The PWE, from this accounting, had a lot more to do with what is rejected rather than what is accepted.  Understanding and even trying to live by TULIP (itself a reductio of much of Protestant theology, a reductio ad absurdum I would now argue)  was never so much in the cards as the much simpler act of rejecting all things Roman in favor of the new order.  The Reformation "denied the merit of good works," something that happened long before Dabney or even before Calvin's Institutes became "Calvinism."  And I know from experience much of that rejection was based less on careful theological reasoning of the kind displayed in New Advent, and more on the fact that it simply seemed "too Catholic" (a phrase you will still hear today, 500+ years after the Reformation began), and so was an unsound practice.  All of the things listed there as rejected, were rejected largely because they were "Popish" (the American Puritan's argument against "Christmas" was that the word incorporated "Mass", which it did; and that was reason enough to reject the observance of the Savior's birth).  But having flung them aside, the Reformers threw out "good works," too.  This the theologians did deliberately; but the laity did almost accidentally.  Nonetheless is suited them, and so culture triumphed aside from theology (which most of the laity wouldn't, and to this day still don't, understand).  Having tossed out the baby (Catholicism), they tossed out the bathwater, too (any Christian idea of "good works").  It wasn't a long trip from there to an emphasis on grace through good works for oneself, i.e, the PWE; even if it wasn't really a path to grace at all, or even a sure sign of one's salvation.   What matters, as ever, is not what God thinks, but what other people think.  In this, as in other matters, Aristotle triumphed once again (or saw more clearly, at least):  what matters most in life is success, and his ethical advice was to find the successful man and emulate him.  He is successful, so he must be doing something right, and he must also be on good terms with God.

Not hard to see a Protestant Work Ethic arising from that ground long before anyone though of developing any mnemonics for Calvinism.