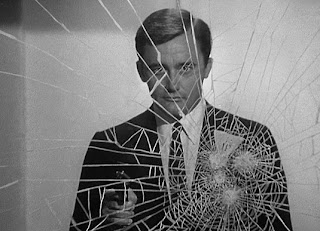 In a decent and orderly world, I would return to continue the discussion about Bultmann; but goddammit!

Witnesses later told the police that Mr. Dye, 42, tried to drag her into his truck. When she fought back, Mr. Dye brandished a .357 revolver and shot her in the leg. She fell to the ground. Mr. Dye fired several more shots into her, saying, "I love you, I love you," according to the police report. He then shot himself in the chest with a different gun, a .45-caliber semiautomatic pistol, and collapsed, dead, onto his wife. "We kept telling them, ‘He's got all of these weapons,' " said Ms. Dye's mother, Barbara Burk, a local official who has fought unsuccessfully in Oklahoma for a measure that would give judges issuing protective orders the power to order sheriffs to confiscate weapons and hold them for a "cooling off" period. "Is there nothing you can do?"

"I can recall moments during the previous administration in which people's First Amendment rights were curtailed when they wore the wrong T-shirt to an appearance by the president. I can remember Bong Hits 4 Jesus, too. But an estranged spouse has a right to a deadly weapon up until the point when he actually shoots it at the person who has sought legal refuge? Where do you go in a country where madmen have all the best lobbyists?"

Charlie Pierce notes that "what happened in Newtown, Connecticut was not much of a point — tipping or turning — nor much of a 'teachable moment,' unless we're all trying to learn how to be dumber than we were before the massacre happened."  And he's right.  The fact is, outside of Newtown or the media bubble, most people in the country don't care what happened in Newtown.  They don't care about a woman in Oklahoma.  Hell, the people in Oklahoma don't care about that woman, or their neighbors, or they'd have stopped sending Tom Coburn to the Senate years ago.  Did you know that approximately 8 children die every day in America from gunfire?  You'll have to scroll down to the 10:29 timestamp to find that statistic, but no one on the panel disputed it.  8 children.  Every day.  We don't even care enough to notice.

Anybody remember the little girl shot in Chicago a few weeks after appearing in Obama's second inauguration celebration?  Anybody even remember her name?  Yet I can name, without trying or wanting to, almost every member of the Kardashian family.

To call this insanity is to insult insanity.  To call it humanity is to insult humanity; yet what else is it?  What is more distinctly human than mindless slaughter of our own species?  Is there any other distinctive characteristic that truly sets us apart from the other living things on this planet?  Rob Portman learns his son is gay and decides same-sex marriage is not worth opposing after all. If Rob Portman's son was shot to death, would he decide gun violence was epidemic, an evil that must be confronted?  Would anybody care?

The New York Times article Mr. Pierce links to starts with a chilling story of a woman assaulted by her ex-husband.  She was only armed with a cellphone which, it turned out, saved her life (spoiler alert).  I suppose the NRA would argue she'd have been safer with a gun in her purse.  It's hard to imagine how.

Nor does this make me feel better:

“NRA leadership worries about two things above all else: perpetuating controversy to stimulate fundraising from individual members and protecting its right flank from the real crazies,” says Richard Feldman, author of a feisty 2007 memoir, Ricochet: Confessions of a Gun Lobbyist. Feldman has worked in various capacities for both the NRA and the industry. “The idea that the NRA follows orders from the gun companies is a joke,” he says. “If anything, it’s the other way around.”

The "real crazies" don't need to be held in check by the NRA.  They need to be locked up, their guns confiscated, and not allowed anything sharper than a rubber ball.

And while a scene like this should make me feel some measure of empathy, it doesn't:


Obviously, continue with production because demand is so high:

And never EVER make a connection between that busy production line and those weeping employees and the slaughtered children dismembered by the kinds of weapons you can't make enough of.  It's a free market, after all.

Mr. Bartozzi isn't concerned, by the way, that Congress will ban assault rifles or large capacity bullet magazines.  He's quite sure the NRA, which after all is protecting us from the real crazies, will see that never happens.  His primary worry is that Connecticut will ban such weapons, and then he may have to move all of their production to Eagle Pass, Texas, because what's legal in Texas won't be allowed in Connecticut.  Our response to Newtown in Texas, by the way?  Arming teachers and pushing laws to allow college students to carry guns on campus.  And yeah, we know that's worked out well.

This is not "gun culture" or any kind of "culture" at all.  It is the "paranoid style in American politics."  It is just another demonstration of "how much political leverage can be got out of the animosities and passions of a small minority."  As Richard Hofstadter said:  " I call it the paranoid style simply because no other word adequately evokes the sense of heated exaggeration, suspiciousness, and conspiratorial fantasy that I have in mind."  "Gun nuts" don't cling to their guns because it is their Constitutional right to do so; they do it because they are insane.


But where do you go when the madmen have all the best lobbyists, and the inmates are in charge of the asylum?