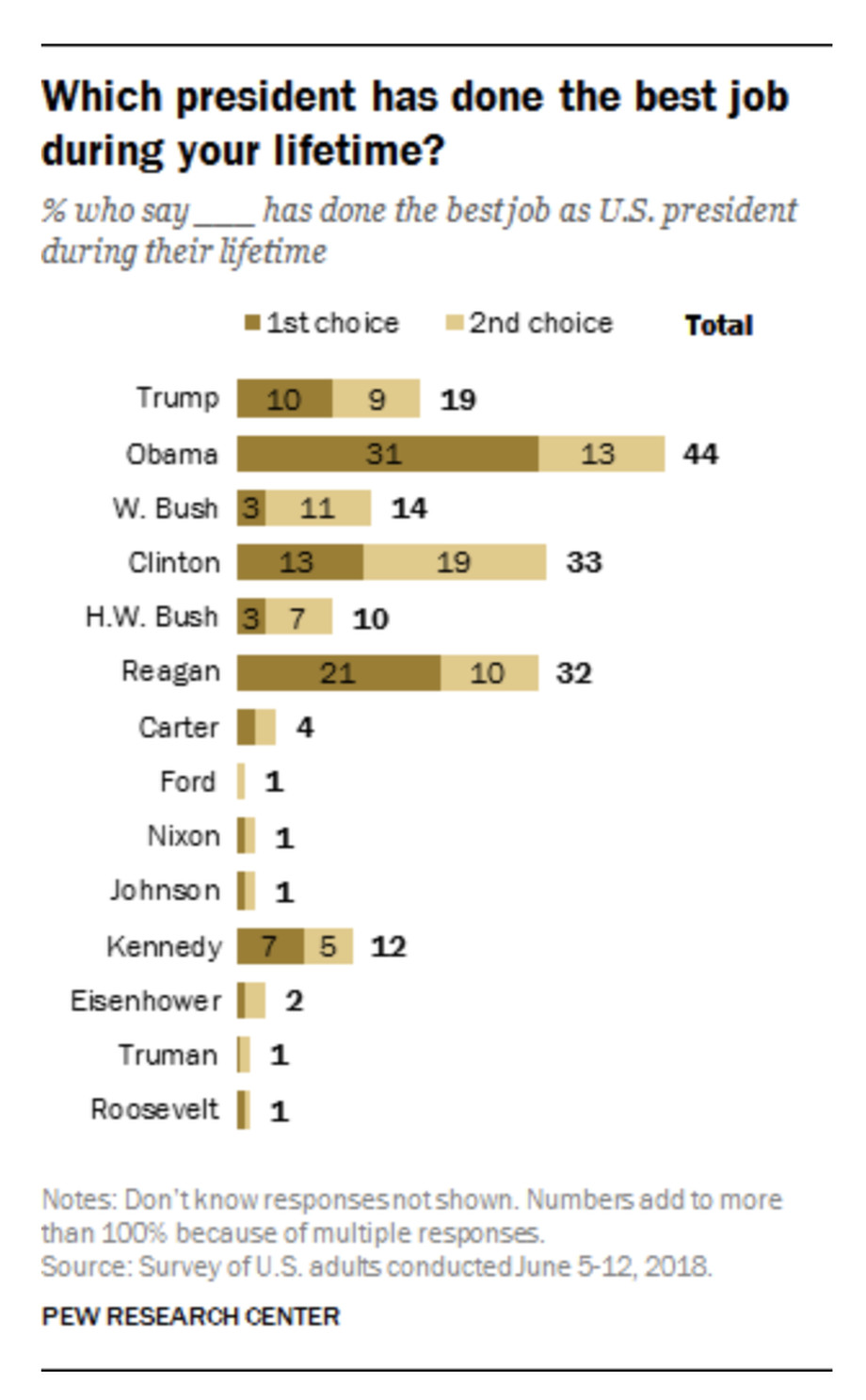 I have this to say about this Pew Poll: a) it skews young; b) it skews conservative; c) it skews toward hype.  Young because Obama wins it walking away.  Hype (and conservative) because JFK, who basically avoided nuclear war in the Cuban Missile Crisis and then died and left a beautiful widow, comes out much better than LBJ, who passed:  the Civil Rights Act; the Voting Rights Act; Medicare.  Those three alone put him in the ranks of FDR as one of our most transformative and important legislation Presidents.  He appointed Thurgood Marshall to the Supreme Court, the first African-American to sit on that bench (Clarence Thomas is only the second.  So much winning!).  Let me just continue this by quoting from a speech by Joseph Califano:

Community Action (now the Community Service Block Grant program), VISTA Volunteers and Legal Services are putting power in the hands of individuals—down at the grassroots. The grassroots that these programs fertilize just don’t produce the manicured laws that conservatives prefer. Of all the Great Society programs started in the Office of Economic Opportunity, only the Neighborhood Youth Corps has been abandoned—in 1974, after enrolling more than 5 million individuals.

Ronald Reagan quipped that Lyndon Johnson declared war on poverty and poverty won. He was wrong. When LBJ took office, 22.2 percent of Americans were living in poverty. When he left five years later, only 13 percent were living below the poverty line—the greatest one-time reduction in poverty in our nation’s history.


I suspect most people who think LBJ wasn't so great also think Reagan was the greatest President of their lifetime.  Hype, as I said, covers so many sins.  Speaking of Reagan, he of the "trees cause pollution" nonsense, what about the environment and national parks under Johnson?

Theodore Roosevelt launched the modern environmental movement by setting aside public lands and national parks and giving voice to conservation leaders like Gifford Pinchot. If Teddy Roosevelt launched the movement, Lyndon Johnson drove it forward more than any later president—and in the process, in 1965, he introduced an entirely new concept of conservation: “We must not only protect the countryside and save it from destruction,” he said, “we must restore what has been destroyed and salvage the beauty and charm of our cities. Our conservation must be not just the classic conservation of protection and development, but a creative conservation of restoration and innovation.”

That new environmental commandment spelled out the first inconvenient truth: that those who reap the rewards of modern technology must also pay the price of their industrial pollution. It inspired a legion of Great Society laws: the Clean Air, Water Quality and Clean Water Restoration Acts and Amendments, the 1965 Solid Waste Disposal Act, the 1965 Motor Vehicle Air Pollution Control Act, and the 1968 Aircraft Noise Abatement Act. It also provided the rationale for later laws creating the Environmental Protection Agency and the Superfund.

This is going to get exhausting, but let's go on to the arts:

What would cultural life in America be like without the Kennedy Center for the Performing Arts, where each year two million visitors view performances that millions more watch on television, or without the Hirshhorn Museum and Sculpture Garden that attracts 750,000 visitors annually? Both are Great Society initiatives.

The National Endowments for the Arts and Humanities are fulfilling a dream Johnson expressed when he asked Congress to establish them and for the first time, to provide federal financial support for the arts to increase “the access of our people to the works of our artists, and [to recognize] the arts as part of the pursuit of American greatness.”

Johnson established the Corporation for Public Broadcasting to create public television and public radio which have given the nation countless hours of fine arts, superb in-depth news coverage, and programs like “Sesame Street” and “Masterpiece Theater.” Now some say there is no need for public radio and television, with so many cable channels and radio stations. But as often as you surf with your TV remote or twist your radio dial, you are not likely to find the kind of quality broadcasting that marks the more than 350 public television and nearly 700 public radio stations that the Corporation for Public Broadcasting supports today. They, as well as the rest of the media, have been helped by the Freedom of Information Act, the Great Society’s contribution to greater transparency in government.


No, really, you're going to wish I'd stopped:

For urban America, LBJ drove through Congress the Urban Mass Transit Act, which gave San Franciscans BART, Washingtonians Metro, Atlantans MARTA, and cities across America thousands of buses and modernized transit systems. His 1968 Housing Act, the creation of Ginnie Mae, the privatization of Fannie Mae and the establishment of the Department of Housing and Urban Development have helped some 75 million families gain access to affordable housing.

In the progressive tradition in which Theodore Roosevelt and Franklin Roosevelt confronted huge financial and corporate enterprises, Johnson faced a nationalization of commercial power that had the potential to disadvantage the individual American consumer. Super-corporations were shoving aside the corner grocer, local banker, independent drug store and family farmer. Automobiles were complex and dangerous, manufactured by giant corporations with deep pockets to protect themselves. Banks had the most sophisticated accountants and lawyers to draft their loan agreements. Sellers of everyday products—soaps, produce, meats, appliances, clothing, cereal and canned and frozen foods—packaged their products with the help of the shrewdest marketers and designers. The individual was outflanked at every position.

Seeing that mismatch, Johnson pushed through Congress a bevy of laws to level the playing field for consumers: auto and highway safety for the motorist; a Department of Transportation and National Transportation Safety Board; truth in packaging for the housewife; truth in lending for the homebuyer, small businessman and individual borrower; wholesome meat and wholesome poultry laws to enhance food safety; the Flammable Fabrics Act to reduce the incendiary characteristics of clothing and blankets.

He created the Product Safety Commission to assure that toys and other products would be safe for users.

When he got over his annoyance that it took him five minutes to find me in the emergency room of George Washington University Hospital, with my three-year-old son Joe who had swallowed a bottle of aspirin, he proposed the Child Safety Act—which is why today we all have such difficulty opening up medicine bottles.


And I should include this, seeing as our President now is a xenophobic racist:

For almost half a century, the nation’s immigration laws established restrictive and discriminatory quotas that favored blond and blue-eyed Western Europeans. With the Immigration Reform Act of 1965, LBJ scrapped that quota system and put substance behind the Statue of Liberty’s welcoming words, “Give me your tired, your poor, your huddled masses yearning to breathe free.” This Great Society legislation refreshed our nation with the revitalizing energies of immigrants from south of our border, from southern and eastern Europe, from Asia and Africa, converting America into the most multi-cultural nation in the history of the world and uniquely positioning our population for the twenty-first century world of new economic powers. In the year before Immigration Reform was passed, only 2,600 immigrants were admitted from Africa, less than 25,000 from Asia and 105,000 from Central and South America. With the lifting of the quotas, in 2006, 110,000 immigrants were admitted from Africa, more than 400,000 from Asia and 525,000 from Central and South America. I can’t see LBJ eating at an Ethiopian or sushi restaurant, but I can see him tapping into the intellectual acumen, diversity and energy of this new wave of immigrants.

And this, since we think children should do janitorial work to earn their school taxes, and Medicaid recipients should pay back what we give them:


Oh, and it wasn't just Medicare he established:

The Heart, Cancer and Stroke legislation has provided funds to create centers of medical excellence in just about every major city—from Seattle to Houston, Miami to Cleveland, Atlanta to Minneapolis. To staff these centers, the Health Professions Educational Assistance Act provided resources to double the number of doctors graduating from medical schools and increase the pool of specialists, researchers, nurses and paramedics.

Without these programs and Great Society investments in the National Institutes of Health, would our nation be the world’s leader in medical research? In pharmaceutical invention? In creation of surgical procedures and medical machinery to diagnose our diseases, breathe for us, clean our blood, transplant our organs, scan our brains? In the discovery of ingenious prosthetic devices that enable so many of our severely wounded soldiers to function independently?


Tired yet?  And I left out what he did for education.  Remember, that was all in 5 years.  Imagine if Vietnam hadn't been his Waterloo, and he'd won another four years.

Let me ask you:  The President who did the best job in our lifetimes is Obama?  Well, I guess so; but if you're that young, get offa mah lawn, ya punks!  And if you're as old as me and still think Reagan and JFK rank higher, I have nothing more to say to you.