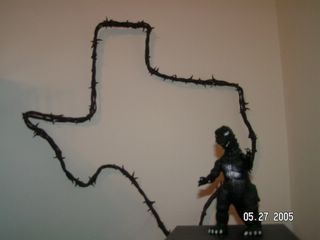 Godzilla welcomes you to Texas. Last one out, please turn off the light.

Yes, it's barbed wire. Or, as it is pronounced in Texas by non-Yankees: "bob wahr." Probably should have started Texas Kitsch blogging here, but it just seemed sort of un-friendly. So we leave Texas kitsch behind (more or less) with the state shape (the most recognizable in the world, I'm told). 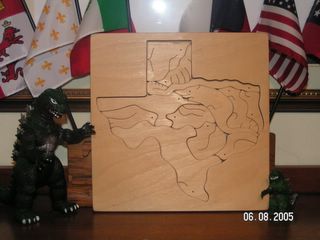 The critters of Texas, in a jigsaw puzzle. Which always puts me in mind of this poem, from the 1860's:

The Devil in Texas

He scattered tarantulas over the roads,
Put thorns on the cactus and horns on the toads,
He sprinkled the sands with millions of ants
So the man who sits down must wear soles on his pants.
He lengthened the horns of the Texas steer,
And added an inch to the jack rabbit's ear;
He put mouths full of teeth in all of the lakes,
And under the rocks he put rattlesnakes.

He hung thorns and brambles on all of the trees,
He mixed up the dust with jiggers and fleas;
The rattlesnake bites you, the scorpion stings,
The mosquito delights you by buzzing his wings.
The heat in the summer's a hundred and ten,
Too hot for the Devil and too hot for men;
And all who remain in that climate soon bear
Cuts, bites, and stings, from their feet to their hair.

He quickened the buck of the bronco steed,
And poisoned the feet of the centipede;
The wild boar roams in the black chaparral;
It's a hell of place that we've got for a hell.
He planted red pepper beside very brook;
The Mexicans use them in all that they cook.
Just dine with a Mexican, then you will shout,
'I've hell on the inside as well as the out!'

This puzzle is actually from one of my favorite places in Austin, Rootin' Ridge Renderings (which will figure prominently if we ever get to Xmas Texas Kitsch blogging. Yes, Virginia, where is Xmas Kitsch! And worse, Texas Xmas Kitsch!). I could name them all, but that would mean taking the pieces out and finding the legend underneath them.

The more obvious ones are: coyotoe; mourning dove (a particular favorite); armadillo; possum (both frequently found in the middle of the road 'round here); the white-tailed deer; the rattlesnake; the grey squirrel; and the roadrunner.

Look carefully, and you'll see that Godzilla, Jr. is making the presentation, too.