Enough Cronyism to go around?

Donald Powell, chairman of the Federal Deposit Insurance Corp., has been assigned to oversee the federal government's disaster recovery efforts in the Gulf Coast, the Bush administration announced Tuesday.

Powell, a wealthy contributor to President Bush's presidential campaign, will be in charge of the long-term plans to rebuild the states hit by hurricanes Katrina and Rita in the late summer. The sluggish federal response to Hurricane Katrina, the first and most damaging of the two, particularly has been widely criticized.

Powell will be the administration's point person for dealing with Congress, state and local governments, and private businesses on the hurricane relief efforts. He eventually will replace Coast Guard Vice Admiral Thad Allen, who has been the day-to-day top federal coordinator for Katrina recovery.

``Don has the leadership, ideas and optimism that the residents of the Gulf Coast Region deserve,'' Homeland Security Secretary Michael Chertoff said in a statement announcing Powell's role.

And, added Chertoff, he can fade the heat for my lack of oversight as well as Brownie ever did. And besides, it's all about compassionate conservatism:

One of the ``Pioneers'' who raised at least $100,000 for Bush's presidential campaign, Powell has great personal wealth. He was praised by the banking industry when Bush appointed him to chair the FDIC.

Great. Another "compassionate" banker. Who knew there were so many in the world? But like Brownie, and unlike a military man who has been praised by the Mayor of New Orleans (who is a Democrat, so what does he know?), Powell is qualified:

Before becoming FDIC chairman in August 2001, Powell was president and chief executive officer of First National Bank in Amarillo, Texas, and chairman of the board of regents for the Texas A&M University System - an earlier Bush appointment.

Hmmm...why does that bother me? Wait! I know why! 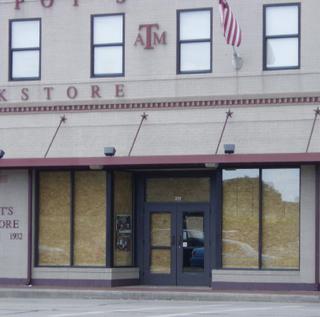 Yeah, this is gonna be a BIG improvement.