The Monsters are Due on Maple Street

From the BBC, via the Mad Priest:


Nearly a third of people worldwide back the use of torture in prisons in some circumstances, a BBC survey suggests.

Although 59% were opposed to torture, 29% thought it acceptable to use some degree of torture to combat terrorism.

While most polled in the US are against torture, opposition there is less robust than in Europe and elsewhere.

More than 27,000 people in 25 countries were asked if torture was acceptable if it could provide information to save innocent lives.

Some 36% of those questioned in the US agreed that this use of torture was acceptable, while 58% were unwilling to compromise on human rights.

The percentage favouring torture in certain cases makes it one of the highest of all the countries polled.

So we are back to the question: "What is torture?" I would like to be able to say I am surprised by this. But in a world where "24" is considered entertainment, and people seriously discuss the "ticking time bomb" scenario as if it made sense, I'm not. Certainly not in a world where this kind of thing happens to a priest:

"I have had my tyres slashed. I have had anonymous threatening letters. I have received other unkind signed letters. I have had fuel stolen from my heating oil tank on two occasions and once we had water put in the tank so we had to have the tank bled. The phone has been tampered with and the exchange reckoned it had been done deliberately. I have had nuisance calls and every now and again we get a prowler. It is very sinister," he said.

Well, let's just say it's a very short step to condoning torture; much shorter than most of us realize. Especially if you've known people capable of doing things that rector describes, as I have. It's far easier to stir the monsters on Maple Street than you might imagine.

Still, there is this:

For many - a large majority, if this opinion poll's indications are correct - torture per se is abhorrent. There are simply no circumstances in which it can be justified.

But for a smaller, though significant section of the global population - more in some countries than others - some form of torture has a place, albeit in certain specific circumstances.

It's back to that ticking bomb again and the essential question: just how far should interrogators be allowed to go?

So it's a mixed bag, and we're back to the question again: what is torture? John Ashcroft on "The Daily Show" called it "shouting in someone's face" in order to get information we need. Keith Olbermann understands it as something more visceral and reprehensible (and it's no surprise Ashcroft wants to call it "shouting in someone's face." One can't help but want to ask the famouly Christian politician "Who Would Jesus Torture?"). Mr. Olberman delivers as stirring a call to arms against torture and lying politicians as I've heard in my lifetime. But neither Mr. Olbermann nor Mr. Aschcroft answers the central question: what is torture? Or is it just that, we know it when we see it? 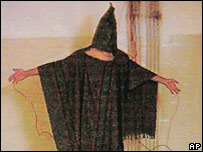 "Ceci n'est pas une torture."
(apologies to Maigret Magritte and my high school French teacher) (Note to self: never post before the coffee is ready)
Posted by Rmj at 11:07 AM