And then I'll change my elf name to "Blisters" 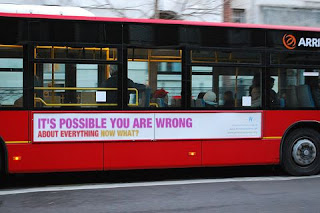 I promised myself I wouldn't do this, but, hey, what's a blog for?

I got into this discussion over at Street Prophets, starting here:

Skimming suggests that you're looking at the proposed DMZ and objecting to... what? The idea that some group is trying to help define the DMZ?

That was from "ogre" (I'll try to keep these straight; copying from SP's comments section ain't easy!). My response went, or meant to go, to the metaphor; but there, of course, my troubles began:

Really? You mean a "no-man's land" where angels fear to tread? My memory of the term goes back to Vietnam, where the DMZ was more likely a free-fire zone than a truly "de-militarized" zone. And either way, it assumes the rightness of bristling military weapons on either side of a very arbitrary line.

But my reaction is not to you; it is to the metaphor. Is this really the best language for such discussions? Is there really a "culture war", for that matter? Again, my memory goes back to the question: "What if they gave a war and nobody came?"

Maybe the search for "common ground" is better found not in "laying down arms" or even saying "Come, let us reason together." Maybe it's found, since this document seems to be largely in a Christian context (I don't mean to be non-ecumenical here), in living the gospel, which means treating no one as enemy; not even your enemy. Maybe the transformation this kind of document seeks, begins with the congregation, the pastor, the people. Maybe it begins by embracing the kergyma of the gospels as the leitourgia.

I know, I know, I'm a hopeless idealist. But most congregations have enough "politics" in them without seeking out more.

My model wasn't the Vietnam "DMZ"

(a farce), but the Korean one, where people only go under defined circumstances--but within them, it's sort of safe.

And yes, there's a culture war. It's been declared repeatedly from the right. Alas, I heard a first person account of an effort at a shared-ground effort in S. Florida (on abortion, on trying to diminish the need and care for those who decided to carry their pregnancies through...). Instigated from the religious left, some of the right joined in the effort. Three years later, they had demonized those on the left, driven out the faith groups from the left, and converted it to a "pro-life" organization.

Don't make the mistake of failing to insist on protective measures and trust building processes.

Politics is the work, the activity, the life-blood of the polis, the city--or in our case, the nation state. Staying clear of it to "remain pure" is, in the end, a fool's game.

Which kinda missed the point, I thought; and I said so:

You mean the mistake of letting someone else set my agenda, determine who my "enemies" are, and making me see them only as "other"?

Or the mistake of loving my enemies, turning the other cheek, and doing good to those who hate me? Is that the mistake I shouldn't make?

And where did I say one should stay clear of politics in order to remain "pure"? OTOH, which would you prefer to live in? The basiliea tou theou? Or Calvin's Geneva?

Yes, yes, I know; by the world's standards, my viewpoint is hopelessly naive. Can't imagine where I get these ideas.....

And then it went to hell in a handbasket:

You're free to choose sides ...

Just don't make a practice forgiving other people's enemies for them ... (and seeking public praise for having done so)

Just don't YOU go "doing good" for those who hate ME -- and expecting me to thank you for it.

The problem with public discussions is taking them personally. As I said originally, assuming a Christian context for the idea that prompted the post, I make my reply to it accordingly.

YMMV, of course. But my comments are in the context of employing metaphors of warfare within the context of Christian ministry. They are not intended as a blanket statement applicable to all and sundry, or to any situation.

I certainly don't expect politicians to all be Christians. But I think there are distinct problems in mixing Christianity into politics, problems above and beyond those that concerned Thomas Jefferson.

Ogre said "Don't make the mistake of failing to insist on protective measures and trust building processes." Which, in regard to Third Way and Robert Jones, makes a good deal of sense

Then you were all like: "You mean the mistake of letting someone else set my agenda, determine who my "enemies" are, and making me see them only as "other"?
Or the mistake of loving my enemies, turning the other cheek, and doing good to those who hate me? Is that the mistake I shouldn't make?"

So when I say : "Just don't make a practice forgiving other people's enemies for them ... (and seeking public praise for having done so.)"
You feel I’M "personalizing ??

OK ... I’ll be honest ... I haven’t a CLUE as to the point you’re making or the context you want to put it in. Are you saying that "this" ... the Third Way thread ... the "Reason Together" Governing Agenda ... is an issue for Protestant Pastors only, Believers only -- everyone else Butt Out ? Nothing (political) to see here ... move along ??

Or are you just re-affirming the value of Cheek Turning as way of getting to Heaven ?

Help! What point ARE you making ?

I'm a Unitarian Universalist. I live in a home (as it were) which is full of "other" and doors open to more.

I'm not looking for the kingdom (nor particularly interested--monarchy...); I'm far more interested in helping build and bring about the kindom, the Beloved Community. Calvin's Geneva, where they burn heretics? No interest, at all.

Doing good to those who hate me--sure. Have. But there are any number of scriptures and other wisdom literature that counsels "Trust in God, but hobble your camel."

Don't make the mistake of thinking that because you're trying to be good and pure and wholesome that those "enemies" won't take ruthless advantage. It's one thing when it's putting yourself alone into their hands. It's another when you're putting others--many others.

The light is at home in the darkness. -- Parmenides

Okay, my point, and I do have one:

1) why do you want to be defined by who declares themselves your enemy? Whether you are UU or Roman Catholic or an agnostic, that just seems like a sad basis for your personal identity. There is a great deal of wisdom in the teaching "love your enemy" and "turn the other cheek" and "do good to those who hate you," and it's not necessarily (although I put it that way originally) limited to devout Christians. Not to be forced on them, either, but rejecting it outright? Wow. You might want to rethink the value of that position.

2) Adam Selene's confusion arises from the category mistake of assuming those who are not explicitly with you, are against you. This is the error of the playground, of the assumption that all the world is like you, and whatever portion of the world isn't, is "enemy." Odd position for a discussion about the problems of reasoning together (which I still think is largely "Let's you and me agree with me!"). Or maybe a perverse object lesson in the fundamental problem.

3) It's curious how threatening my position apparently is, though I didn't think it threatening at all, just an obvious response to very militarized language. "Enemy," after all, especially in the context of a metaphor like "DMZ," means "Fight to the death." As I noted, "DMZ" describes an area bordered by bristling weapons and people ready to use them at a moment's notice. It's a "no-man's land," and an odd metaphor for any discussion about what should be civil disagreements. But that point was discarded early on, and the discussion quickly devolved into defending personal boundaries, with the "other" not only attacking "us," but defining "us," too.

Don't make the mistake of thinking that because you're trying to be good and pure and wholesome that those "enemies" won't take ruthless advantage. It's one thing when it's putting yourself alone into their hands. It's another when you're putting others--many others.

This is Niebuhr's argument in Moral Man and Immoral Society. Two problems with raising it here, though: none of us in this discussion are civic or national leaders. We are not accountable to untold others for our decisions. Nor is the topic under discussion a matter of national or even personal security. No one is going to threaten my life or liberty by subscribing to the ideas of CLURT. So let's get a bit of perspective here (and this, btw, is what I meant by people taking things on the web personally. My point was about metaphors and imagery, and before you know it, I'm endangering the country with my naivete. Yikes!) I may disagree with CLURT (and I do), but I can do so without putting lives at risk.

I mean, I don't think anyone is going to arrest me because I decline to employ the workbook CLURT plans to issue. And it's not like I opened a jar of mosquitoes at a conference, or something.

This entire contretemps points up a problem I have in the larger context of discussions in left blogistan. Since the election of Barack Obama, there has been quite a clamor for him to do to the GOP what the GOP was perceived to have done to the Democrats for the past 8 years. There is a great desire, in other words, for "all or nothing" solutions, and for people to take sides and line up with the right powers and get on the team. Which is understandable, and even very human (blogs could be the source of sociology dissertations for decades to come!). But it's not very enlightening; or really all that enlightened. So maybe we should reconsider our telos; or at least, how we attain it. Because from what I get here, the "kindom" of God looks a lot like the "reasoning together" community of CLURT; just with radically exclusive memberships on either side.