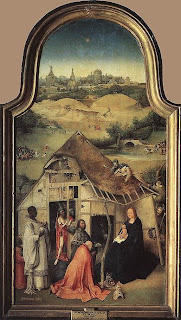 These recent postings are all of a piece, though it's difficult to see that clearly until enough of them are up; and perhaps it isn't even clear then. The central theme is morality; or should be. And Vattimo has some interesting thoughts on the resurrection and certainty and metaphysics that I want to return to. In the meantime, I'm just going to point to Wounded Bird's post about Updike's poem "Seven Stanzas at Easter" (which I have to admit I didn't know). I point to it because I find the discussion fascinating, and I want to add a comment on it. I want to add a comment without stomping on it like Godzilla on Bambi with my huge and scaly theological foot. Whether I can do that or not remains to be seen.

First, there is the central thesis of this poem:

Make no mistake: if He rose at all
it was as His body;
if the cells’ dissolution did not reverse, the molecules
reknit, the amino acids rekindle,
the Church will fall.

One commenter at WB notes:

Well, it may be that the man-made church will fall if the Incarnation and the Resurrection aren't literal events.
But God won't fall with it. He's bigger than all our words and man-made ideas.

I just, sometimes, wish there was a little more humility from those who claim to know all the truth.

Which is probably true, but what is that to us? I'm Protestant enough to still flinch at the capitalization of "the Church", but more and more I realize the sheer practicality of the institution. Without it, what do we Christians have? Jews can at least came an ancestral connection to the God of Abraham, but we Gentiles? What do we have except our common confession, and what keeps that confession alive except an historic and history-spanning institution, one we can, however imperfectly, trace back to Paul and Peter and the original disciples.

And that takes us directly to the story of the Resurrection. It's an interesting story in the Gospels. Mark originally didn't include it at all; he ends with an empty tomb and terrified disciples. Matthew works it in almost as a coda to his gospel. Mary of Magdala and Mary touch his feet, but that's mentioned only in passing. It is up to the Roman guards to verify the body is missing, and they give the explanation that it was stolen (one they don't seem to believe). Jesus appears to his disciples and gives them the "Great Commandment," but, as Matthew says, despite standing there and listening to him, "some were dubious." (Matthew 28:17b, SV). Luke has Jesus appear to some otherwise unknown followers on the road to Emmaus and then, in a scene that echoes John's later gospel, shows them his wounds and eats a piece of grilled fish (to prove he's corporeal, not merely ethereal). John's gospel includes this "sign" from Luke's version (although scholars don't include these in the "Signs Gospel." That's another discussion, huh?), and adds a meal by the seashore, so Jesus can eat and give Peter further instructions. It's only in Luke's Gospel (a scene repeated in Acts, Luke's "Volume 2") that the corporeal Jesus ascends into heaven. All the versions, in other words, are different in significant ways. And yet Updike is right: this is the central kerygma of the gospels. This is the basis of Peter's sermon at Pentecost (and the rest of his preaching in Acts), and the central claim to the authority of Jesus that Paul relies on in his letters (where no mention of Jesus' teachings, aside from the institution of the Eucharist, is ever mentioned).

Which is not the end of the conversation, but just the beginning of it. Nor is it an assertion of fact; it is a confession of faith, a statement of belief. And already we are in trouble again, because at least since the Enlightenment, and certainly since the empiricism of Locke, Berkley, and Hume, and despite the death of Logical Positivism (the corpse that won't stay buried!), we still popularly insist that "faith" and "belief" are synonyms, and both mean "when you believe something that you know ain't true." Except, of course, as William James was at pains to point out, they don't:

Perhaps we should approach this in Jamesian terms, then, and be pragmatic about it (which is almost to say, agnostic). Is the resurrection a living option for Christians? Or is it, in Bultmann's infamous phrase, merely a "primitive mythology"? Is it something we know ain't true? Or is it our confession as Christians?

The "modern" tendency is to skirt the issue. After all, if we proclaim the Resurrection a reality, not merely a contingency, we are professing an impossibility. True enough, but no less so than it was for Mark, whose gospel ends:

And when the sabbath day was over, Mary of Magdala and Mary the mother of James and Salome bought spices so they could go and embalm him. And very early on the first day of the week they got to the tomb just as the sun was coming up. And they had been asking themselves, "Who will help us roll the stone away from the opening of the tomb?" Then they look up and discover that the stone has been rolled away! (For in fact the stone was very large.)And when they went into the tomb, they saw a young man sitting on the right, wearing a white robe, and they grew apprehensive.He says to them, "Don't be alarmed! You are looking for Jesus the Nazarene who was crucified. He was raised, he is not here! Look at the spot where they put him! But go and tell his disciples, including 'Rock,' he is going ahead of you to Galilee! There you will see him, just as he told you."And once they got outside, they ran away from the tomb, because great fear and excitement got the better of them. And they didn't breathe a word of it to anyone: talk about terrified. . .(Mark 16:1-8, SV)

Mark didn't even know how to talk about it. Each gospel after Mark adds its own version, and no two are exactly alike. Why do we make of this that they believed absolutely and perhaps even ignorantly, what we cannot possibly accept, our "enlightened" age, as true? Are we so superior to them? What is the source of our certainty, in the face of their evident uncertainty? Mark has no walking corpse at all, no body, no person of Christ. Matthew's risen Lord speaks, but no more. In Luke's he appears first as a stranger who is revealed (the reversal of Matthew's epiphany, at the end, not the beginning) at a meal, and then vanishes. Both Luke and John's risen Jesus has a body that can be examined, can be proven to be the one that hung on the cross, but John's Jesus appears in a crowded room behind unopened doors. What certainty is this? But if we still consider ourselves superior to the ancient witness, if only because we are contemporary and they are the past, let me suggest Borges' "The Gospel according to Mark" as a corrective.

In that story the illiterate Gutries, gauchos on an Argentinian ranch, are not educated by the college trained and bilingual Espinosa, who translates the English version of the gospel into Spanish for them. They are not enlightened by his superior European culture (he is from Buenos Aires, but as Borges makes clear, European through and through, as the Gutries are almost wholly South American Indian). They learn from his reading, but not the lesson he expects them to take. Our knowledge does not make us superior to others; it simply makes us different from them.

So it isn't that Mark was ignorant and superstitious, or people of the first century benighted and primitive. It is not a primitive mythology we have to discard. It is, rather, the idea of the primitive.

Which may, or may not, get us in the vicinity again of Vattimo's comments on metaphysics. We shall see what we shall see. Nor should we ignore the irony of bringing this up in the season of Epiphany. Which is not to say there is a better or a worse time to raise such subjects, but some times are just funnier than others. Funnier still is that I lost a whole development of this topic by figuring it out in the shower and not having a waterproof surface to scribble it on. So next we'll have to take up what prayer is for; unless lightning strikes twice, and we return to this topic first.