"Of making many books there is no end..." 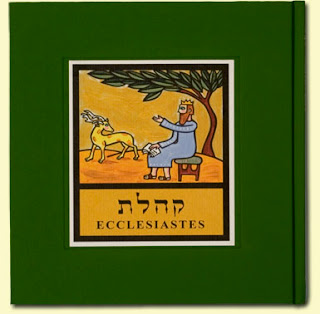 b) I've nothing better to do; and

c) The ideas expressed here are not necessarily those of the management,

I decided to pick this up and give it a fuller airing than it will get in comments, below:

Can I beg your indulgence to post this here first?

The New Atheism As A New Dark Age by Anthony McCarthy

Are the ScienceBlogs supposed to be a place where people can go to find out more about science and reason? Is it unreasonable to ask a ScienceBlogger with a PhD in Mathematics, who teaches mathematics at a university, to clear up a disagreement about his subject on the thread of his blog?

The question is whether or not mathematical probability could deal with the proposal that Jesus was the only begotten Son of God, conceived by miraculous means and born to the Virgin Mary. What are the odds of The Virgin Mary conceiving a child by the Holy Spirit and giving birth to the only begotten Son of God, an event held by those who believe it to have happened exactly once in all of history.

I thought probability couldn’t honestly come up with the odds of that happening, apparently some of the new atheist faithless at the blog of Jason Rosenhouse PhD thought it could. I had pointed out exactly why science couldn’t deal with the question on the thread.*

Having had enough of trying to reason it out with the new atheists on his blog, I asked Jason Rosenhouse to settle the question by either telling us how it could be done or to say that it wasn’t possible to apply probability mathematics to that claim. If he thinks it can, would he sign his name to an attempt?

In the process of participating in the thread discussion this request was made in, it became clear to me that the new atheist program is a manifest failure. All over the blogs, the knowledge of the most basic requirements of science and logic demonstrated by the new atheists who post comments there, proves that they are generally quite ignorant of those. In many cases they are abysmally ignorant and as ready to spout their clueless blather as the most ignorant religious fundamentalists.

Many of the fundamentalists at least have the excuse that they’re not trying to pass themselves off as practitioners of science.

Is the level of science knowledge demonstrated by the new atheists of the blogs really what the new atheists are aiming for? Because it looks more like the dark ages to me, complete with sectarian bigotry and irrational hatred.

I thought that some other people might be interested in this question. Pass it on, if you think it’s interesting.

* 81 They are at odds because the scientific process by which one arrives at an understanding of the formation of, say, the blood clotting system is fundamentally *incompatible* with the theological process one uses to arrive at the conclusion that Jesus was the product of a Virgin birth.

I'm glad you used the Virgin birth, which I don't happen to believe in [see below], because it's such a good example of why you can't subject it to science.

No evidence means no evidence that could identify a human father.

It happened miraculously, which means there is no way to explain how it couldn't have happened.

It is held to have happened once in history. As a unique event you could not debunk it by pointing to another or even every other human birth in history.

There is absolutely no reason you should believe it, as I said I don't, but any statement that you can subject the actual assertion to science only shows that you lack any real understanding of science.

I'll start by saying "Miraculous" already puts the matter beyond the purview of science, as "miracle" is, by definition, a violation of the scientific principle of "laws" of nature, or physics, or what have you. So calculating the odds of a miracle is a dubious prospect, at best. I mention this because I'm sure Anthony has an answer for that, and this creates an opportunity to solicit that answer.

Interestingly (coincidentally? synchronicitally?), this book came into the store yesterday, and I got a chance to look at it. The chapter which caught my eye was, of course, the chapter on religion: "God is a Liberal." Not sure what the title of that chapter means, as the author talks of "neo-liberalism," which some observers of international affairs have likened to a virus (it is as well regarded as the neo-conservatives are in America, and around the world, so "liberal" does not automatically mean "good"), but the thesis of the chapter draws a direct line from Henri Bergson to Karl Popper to the Reformation, arguing that the modern iteration of the Protestant ethic runs through Bergson and Popper to Wall Street, where we have ensconced the notion of the free market which makes all good, or, to paraphrase Eliot (and emulate Proust, with this sentence): "I think the market is a great green god...."

It's a fascinating analysis, especially as it includes the comments of several imams regarding Western culture. They admire the successes of Western science, indeed, don't gainsay them (how can you argue with success?), but they question our definition of "success." Science has succeeded, they point out, but at what cost? Materially we have benefited, although as the technological noose tightens we more and more understand there is, indeed, no such thing as a free lunch. But the imams question the moral, even the spiritual, cost (the former is still acceptable secular discourse, the latter deeply suspect; so it goes) to a culture so devoted to technology (which is all that science really is, anymore; at least to the larger society). And to the extent science is a philosophy, well, you get posts like the one Anthony linked to.

Anthony complains that the bloggers of such posts lack fundamental logic and reason; and I don't disagree. Alastair Crooke points out that our Western logic and reason has not been an unalloyed good which has led us, like a savior, to the Promised Land. I've commented before on the problem of the Big Idea, the one that miraculously works to save us from all our failings. Crooke points out that the Muslims we bestride (and we do, even we "liberals" and "progressives") see us has having moved away from the very roots of wisdom we claim to be rooted in, including Hellenism and even Hebraism (the former has become synonymous with science and "good," the latter with superstition and "bad." There are more than a few problems with that dichotomy, as the imams who spoke to Crooke point out. How many of us could provide the same trenchant understanding of Middle Eastern culture?). I've come to the conclusion the intertubes will no more save us than the political parties will, that both suffer from the same fundamental problem:

They're made up of people.

Soylent green is people. So are blogs. What now?

People are no smarter on blogs than anywhere else, and gathering PhD's is no better guarantee of wisdom or clarity than gathering a group of illiterate migrant workers. That sounds demeaning, only because we've been taught to honor PhD's and belittle the illiterate, but it's a certainty that Jesus of Nazareth was illiterate (who would have taught him to read? He wasn't a scribe or a Pharisee, like Paul, who couldn't write more than his name, either.). Illiteracy is not a sign of intelligence, nor certainly of wisdom. Solomon was probably illiterate, too. He had money, and money bought scholars, and scholars bought the patina of wisdom. Andrew Carnegie did the same thing by building libraries across the country after making money as a robber baron (one of his libraries was central to my childhood, and I cherish the memories of it, but Carnegie was still a robber baron). Same as it ever was. What we honor is power and privilege, and so people on blogs lay claim to both, myself included. I won't even bother with the details of the post Anthony linked; one glance convinces me it's in line with what Crooke critiques: the idea that empiricism and positivism (two terms I'd almost guarantee Jason Rosenhouse can't place in Western cultural history, much less adequately define or explain) are the roots of truth, and no other claimants need apply.

In radical political circles they used to call that attitude "hegemony." Apparently it's still okay, so long as the right people are doing it. The people Alastair Crooke rights about and quotes, understand this. We, for the most part, still don't.

And this is why I despair of the "blog project." There is, indeed, nothing new under the sun.