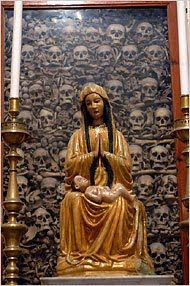 The fact is that the world does not understand the eternal. Temporal existence has a temporal and to that degree an activist conception of need and also has a materialistic conception of the greatness of a gift and of the ability to do something to meet need. "The poor, the wretched, may die--therefore it is very important that help be given." No, answers the eternal; the most important is the mercifulness be practised or that the help be the help of mercifulness. "Get us money, get us hospitals, these are the most important!" No, says the eternal; the most important is mercifulness. That a man dies is, eternally understood, no misfortune, but that mercifulness has not been practised is....The eternal maintains wiht immovable firmness that mercifulness is the most important. No thinker can be so stiff-necked as the eternal is about its thought; no thinker can be so calm, so undisturbed by the urgency of the moment and the danger of the moment which seem to enforce the view that is is most important of all that help be given in every way; no thinker is so calm, so undisturbed, as the eternal. And no thinker is so certain as the eternal that men must finally, nevertheless, come around and think his thoughts, for it says: just wait; we shall talk about this in eternity, and we shall talk simply and only about mercifulness and simply and only about the distinction--merciful/not-merciful. O, that I could portray the countenance the eternal will assume when the rich man answers the question whether or not he has been merciful: I have given hundreds of thousands to the poor! For the eternal will look at him amazed, as one who cannot get into his head what he is talking about; and then it will again put the question to him: have you been merciful? Imagine that a man went out to confer with a mountain about his affairs or that someone had dealings with the wind about his enterprises--the eternal will not understand any better what the rich man says of hundreds of thousands and what the powerful man says of having done everything.